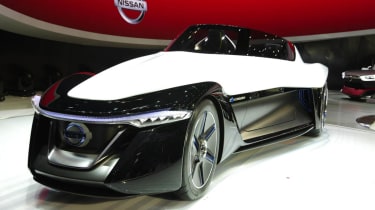 The rather bold looking Nissan Bladeglider concept has had its Tokyo motor show unveiling. A zero emissions electric vehicle, its design is inspired by swept-wing aircraft. And if you’ve followed endurance racing recently, you’ll no doubt see huge hints of Nissan’s Deltawing racing car from the narrow front and wide rear track setup.

The shape is designed with a low drag coefficient and high downforce in mind, and sits neatly alongside the similarly profiled Nissan ZEOD RC that will compete at the 2014 Le Mans 24 hours.

An iteration of the Bladeglider will make it to production, too, the recently launched Volkswagen XL1 showing there is a market (albeit a pretty small one, currently) for bold, efficiency-focused curios. Nissan says the production version could get in-wheel electric motors, with independent powering of each rear wheel replicating the effect of torque vectoring, with the resulting positive effects on manoeuvrability and high-speed agility. As a rear-drive performance car, Nissan reckons we can expect ‘exhilarating steering control when cornering under threshold conditions’. What oversteering a car this shape might feel like is another matter…

Lithium-ion batteries power the motors, with technology lifted from the Nissan Leaf electric car. The batteries are mounted low and towards the rear, with a 30/70 front/rear weight distribution figure claimed.

The Bladeglider’s underbody is carbonfibre, while the body is crafted from carbonfibre-reinforced plastic (CFRP). It’s a beguiling looking car, and the interior matches the exterior with V-shaped seating for three (the driver front and central, bringing the mighty McLaren F1 to mind), an aircraft-inspired steering wheel and plenty of electronic interfaces. It’s also designed to boast the near-360 degree view afforded to pilots of gliders.

Despite its bold appearance, the Deltawing is fighting for attention on Nissan's Tokyo motor show stand with the new 2014 model year GT-R, the 591bhp Nismo GT-R and the preview of a potential Toyota GT86 rival, the cool Nissan IDx.