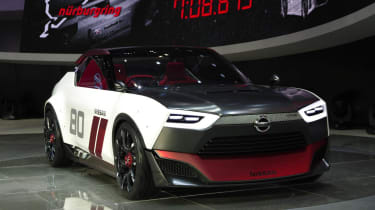 Nissan’s long rumoured Toyota GT86 rival looks a step closer to reality thanks to one of the company’s Tokyo motor show concepts. The IDx has been shown in sporty Nismo trim, as well as decidedly retro ‘Freeflow’ form, which gives a heavy nod towards the old Datsun 510.

While both are retro in shape – there are shades of the original Skyline GT-R in the IDx Nismo – they are designed to be a take on the compact rear-drive sports car recipe aimed at younger buyers than the GT86 and BRZ, which Nissan has apparently described as ‘mid-life crisis cars’. Both also currently sit below the Nissan 370Z when it comes to performance and accessibility.

Should the IDx make production (and it would both unfortunate and surprising if it didn’t), personalisation is likely to be key. The Freeflow displays a ‘natural and tasteful’ look, while the floating roof look is borrowed straight from paragons of personalisation and popularity such as the Range Rover Evoque and Mini Cooper. The four-spoke alloy wheels are a particularly nice-looking touch.

By comparison, the Nismo is a more aggressive looking thing, with different lights front and back, a rear diffuser and centre-locking alloy wheels. It is inspired by racing simulations we’re told, and admittedly it would look right at home in Gran Turismo or Forza Motorsport.

Under the surface, the basics sound (almost) spot on. At 4.1m long, 1.7m wide and 1.3m high, the IDx is practically identical in size to the GT86, while the promise of little turbocharged petrol engines – from 1.2 to 1.5 litres in size – sounds like the ideal way to power a lightweight rear-driven coupe. The only fly in the ointment – hence that ‘almost’ – is Nissan twinning these powerplants with CVT transmissions, though a European-spec production car would hopefully receive the sensible addition of a proper manual gearbox.

Nissan has had a busy Tokyo motor show, displaying the Deltawing-inspired Bladeglider, the 2014 model year GT-R and the Ring-conquering GT-R Nismo. The potential for what the IDx could become is arguably just as exciting as that trio.