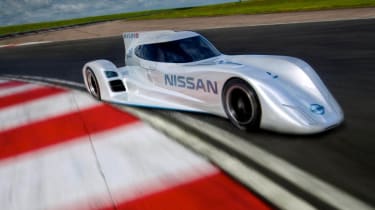 Nissan announced at Le Mans that it will enter 2014’s race with an experimental car that will use electric power. The ZEOD RC will utilise lithium battery technology seen in the Nissan Leaf and will be capable of 186mph-plus.

Although the racer has no direct links to the much acclaimed DeltaWing, it does share the same chief designer, Ben Bowlby, and strongly resembles its predecessor, although various design changes including a newly closed cockpit to meet new rules.

No drivetrain configuration has been confirmed, but one hurdle engineers will have to overcome is range. Nissan is considering a system where the vehicle runs purely electric for only part of the race, using a conventional petrol engine the rest, while a combined hybrid system is another option. 'ZEOD' stands for Zero Emission On Demand, all but confirming the car will not run on electricity alone.

Following the success of last weekend’s 2013 Le Mans 24 hours, where Nissan-powered cars took four of the top 10 LMP2 places, an ‘extensive testing programme’ is scheduled to take place over the next 12 months before this entry – which will operate from garage 56, reserved for experimental entries – competes in the round-the-clock race. In the long term Nissan is targeting a fully-fledged electric LMP1 racer to challenge Audi, Porsche and Toyota.

Following the success of hybrid powertrains in recent years some believe the next logical step is pure electrical drive. Nevertheless this is still a controversial topic, with heavyweights such as Toyota suggesting fuel cell technology could be the next step. Either way it looks like Le Mans has a bright, if not slightly quieter future ahead.