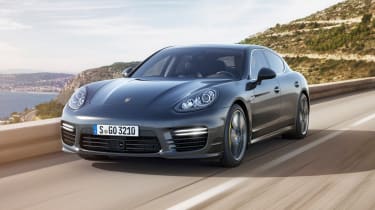 Following on from the recently launched Panamera (Full Panamera Turbo review here), Porsche has released pictures and details of the latest iteration of the top-of-the-line 562bhp Turbo S, ahead of its Tokyo motor show reveal later this month.

The brute has had the same nip-and-tuck treatment as the rest of the range, including larger intakes fitted, LED headlights, larger rear window, colour coded four way spoiler and a redesigned rear bumper which now houses the number plate.

It isn’t just about the minor styling tweaks either. The twin-turbo V8 powering the super saloon has been mildly fettled, with new turbochargers and high-pressure fuel injection system. The tweaks see power rise from 542bhp in the old Turbo S, to 562bhp – in turn almost 50bhp up on the standard Turbo.

Porsche’s 0-62mph claim still stands at 3.8 seconds – but the top speed is up 3mph to 193mph. Power is transferred to the road via Porsche’s Haldex-style multi-plate clutch four-wheel drive system, which comes with ‘Dynamic Chassis Control’, ’Torque Vectoring’ as well as ‘Active Suspension Management’ as standard.