The 621bhp V12-engined Mercedes S65 AMG mega-saloon has been revealed, ahead of its Tokyo and LA motor show reveal. Pictures, specs and details here 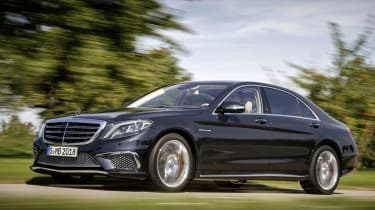 Mercedes has revealed the first pictures and details of the latest generation S65 AMG - its most powerful S-Class model. Packing the same bi-turbo V12 engine as its predecessor and the mighty SL65, the S65 produces 621bhp and 737lb ft of torque.

The engine channels its power through the company's seven-speed automatic gearbox, first used in the SL65. The company quotes a 0-62mph time of 4.3secs, fractionally quicker than the V8 S63, as well as the usual electronically limited top speed of 155mph.

Although Mercedes has yet to confirm the S65’s weight, improved CO2 and fuel consumption figures have been confirmed. Considering the size and performance on offer, Mercedes has done well to achieve the claimed 23.7mpg and 279g/km figures, claiming it to be the world’s most efficient V12.

Externally, the S65 is subtly different from the lesser V8 model. The biggest change is the addition of some 20-inch lightweight alloy wheels, but the grille now features 12 slats – one for each the cylinders – and the bumper gets chrome mesh in the bottom intakes. There is also the slightly less subtle V12 badging.

Although not confirmed, UK prices are likely to start at around £170,000 when the car goes on sale next year.