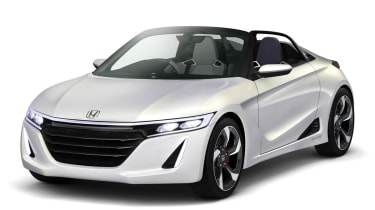 The Honda S660 concept previews a comeback for the Honda Beat sports car. Described slightly clunkily as an ‘open-top sports-type mini-vehicle’, it’s a small roadster that takes clear inspiration from 2011’s Honda EV-STER concept as well as the Beat, which battled the Suzuki Cappuccino in the 1990s.

Styling has changed little since the EV-STER, with the grille and lights now looking much more production ready, while the drivetrain has switched from 78bhp electric power to a 660cc three-cylinder turbo engine with 64bhp, which allows the dinky S660 to comply with Japan’s dinky Kei-car rules, something the Beat, Cappuccino and later the Daihatsu Copen took advantage of.

While the S660 could hark back to the Beat with a mid-engine, rear-wheel drive layout, its gearbox is a little less exciting, eschewing a manual for a CVT transmission. Expect a modest top speed below 100mph and a 0-60 time of over 10 seconds, though the S660’s diminutive size (and therefore low weight) should ensure it’s agile.

A production version of the Honda S660 is expected in 2015, with a retractable roof and smaller alloy wheels likely to be the key changes. The interior is also likely to gain a more conventional steering wheel and air conditioning controls. The 660cc model is set to remain in Japan, but a bigger engined version – perhaps with a 100bhp 1-litre turbo petrol engine – could be exported elsewhere. With Honda’s UK range lacking a sports car since the S2000’s 2009 demise, fingers crossed we see a version on our shores.

The Honda S660 will debut at November’s 2013 Tokyo motor show, two years after the EV-STER made its bow in the same halls. Also on Honda’s stand will be the latest NSX concept and an array of motorbikes and Honda’s ASIMO robot.