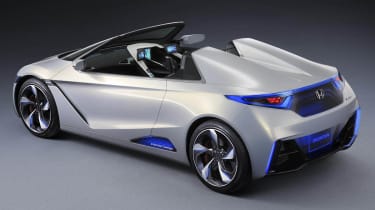 Honda has unveiled its new EV-STER at the 2011 Tokyo motor show. It’s a compact electric sports car concept that’s set to mark a return to performance soft-tops after the end of S2000 production in 2009. The EV-STER’s body makes use of carbon composites, to keep weight as low as possible, maximising performance. The car will also be rear-wheel drive, an immediate nod towards fun rather than frugality. Power comes from a small electric motor, which runs on lithium-ion batteries. The battery is rated at 10 kWh, with a peak output that equates to about 78bhp. This should be enough for the car to accelerate from 0-37mph (60km/h) in 5.0sec, and will allow it to cover close to 100 miles on a single charge. Charging time varies between three and six hours depending on the type of charger used. Technology is pivotal, with twin-lever steering (testing in an F1 car apparently yielded a huge improvement in lap times) and flash graphics screens which dominate the interior, allowing drivers to vary power output and suspension settings. At the moment Honda has not announced any production plans for the EV-STER, although it is keen to stress that it remains committed to producing sports models. The EV-STER is most likely to evolve into a modern-day Beat, a titchy sports car not for the Japanese market. But with a new NSX and Type-R models on the way (full story here), expect its styling to influence performance cars we do get to drive here.