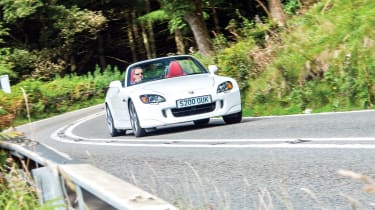 It honestly feels like yesterday. The hot sun of the Côte d’Azur, the zig-zag tarmac staircase of the Col de Braus clambering up sun-bleached crags. Echoing off the rocks is the keening of the then-new Honda S2000, while tucked into its wake are three of the best late-’90s sports cars – Porsche Boxster, TVR Griffith 500 and Lotus Elise.

That feature – ‘The Hunter and the Hunted’ – was one of the defining group tests from the early days of evo (issue 009 to be precise). Long days, fabulous roads, many miles of hard, fast driving and a typically uncompromising verdict: the S2000 missed the mark. So why are we celebrating it in our Icons series? Because now as then, the prospect of a light, powerful, ultra-high-revving two-seater rear-drive sports car is something to get the juices flowing.

Still, when editor Gallagher – who was also on that original test – asked me if I’d like to revisit the S2000, it felt like we were going to give a beaten dog one last kicking. That said, the passage of so many years can alter the context by which you judge a car. And the Honda surely deserves a shot at redemption. 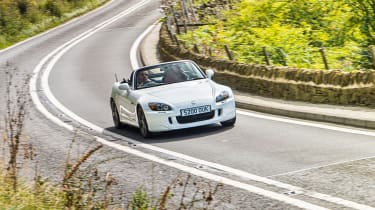 One thing is for certain: in these days of forced induction and twin-clutch transmissions, the S2000’s specification reads like the stuff of dreams. You’ll struggle to find anything close to its absolute banshee of a naturally aspirated four-cylinder motor, with its stratospheric red line and scarcely believable specific output. Let alone one mated to a six-speed manual transmission that, as any car bore will tell you, is an all-time benchmark for the stick-shift.

The classic front-engine, rear-drive sports car recipe was one we had grown used to Mazda owning with the MX-5, so when Honda muscled in with a considerably more potent and advanced interpretation to celebrate the company’s 50th anniversary, we really sat up and took notice: its promise was considerable and compelling. The wrapping wasn’t half bad either – a sharp dagger of a profile with aquiline features that borrowed little from existing rivals but didn’t try too hard. It’s still a handsome car today, though its stance and modest wheels have less impact than they did, which betrays its age somewhat.

As does its size. It’s pleasingly small from the outside, and actually on the cramped side once you get in, with the shallow dash and skinny door cards emphasising your proximity to the windscreen and the outside world. The seats are comfortable and locate you well, but you’re perched a little too high, so you look down on the non-adjustable steering wheel rather than at it. 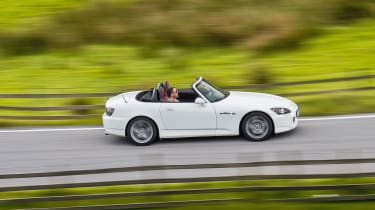 The pedals are offset slightly to the right but nicely spaced. The brake pedal is firm, with enough give in it for finessing downshifts with a heel-and-toe blip whether you’re working the pedal with maximum pressure or just rowing along at moderate pace.

I’d forgotten about the digital dashboard – what motoring journalists before my time would have quaintly described as ‘Tokyo by night’ – and its lo-fi whiff of Atari or Texas Instruments. In an age of retina displays and OLEDs it could look embarrassingly dated, but to be fair the instrument pack still looks surprisingly good and works well.

> Honda S2000 replacement in the works

The overall build quality is impressive, too, just as you’d expect from a Honda. There are a few squeaks and rattles, but these tend to go with the territory in small, light convertible sports cars. Handy switchgear – extended, soft- contoured toggles that actually operate like rockers – sprout from the dash, while a big red starter button (a novelty in those days) takes pride of place on the far right. Pleasingly, there’s something reminiscent of the early NSX about the clear ergonomics and white-on-black typeface used to label everything. The cockpit of an S2000 is a good place to be.

The 2-litre in-line four-cylinder engine has always been the star of the show with the S2000, but it takes a while to warm to it. Start it up and it sounds a bit tinny and resonant, both at idle and moderate revs; that’s in complete contrast to the uncanny smoothness and ferocity it displays as you hunt the red line.

Below 5000rpm it feels hollow – in the context of 2017, almost empty, with that void in the power and torque curves only filled out once the VTEC system has woken and starts to work its magic. As a consequence you initially wonder what all the fuss is about. You can easily drive it for ten or twenty minutes and never get anywhere near the VTEC zone. Depending on your outlook this is either hugely frustrating and a bit of a waste of time, or simply an extended period of foreplay before the real fun begins. Whichever way you slice it, you most definitely look forward to the moment you can feel and hear the hot cam profiles come into play, revs building and building until the VTEC takes effect and illuminates the performance like a light switching on.

This zone is the nub of the S2000 experience and the root of the VTEC’s cult following. If anything it feels so much more special these days, because although turbocharging has given us far more accessible and abundant performance, nothing else has that purity of concept or singularity of experience.

It’s not all down to the engine, though. We’ve banged the manual gearbox drum for years now, but very few, if any, of the manual cars we’ve celebrated compares to the S2000. Its shift has a terrific sense of mechanical connection – boosted by the tactility of the cold metal ball that tops the gearlever – combined with the speed and binary consistency of a switch.

The real beauty of it is you can snick it through nonchalantly at low speeds or snap it through as fast as your wrist can punch it through the narrow yet precise gate. It’s a perfect mate for the engine, which needs keeping at a rolling boil if you’re to drop into the VTEC zone with each upshift. Steely, sharp and apparently bulletproof, it’s a marvel of tight tolerances and endless fine-tuning by engineers and drivers obsessed with speed and precision. 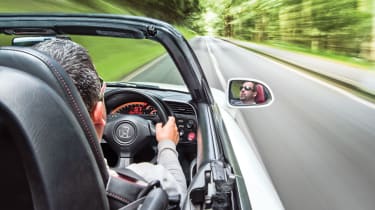 It’s been too long since I drove an early car to give a detailed appraisal of how the AP1 and AP2 compare, but what I can say is this car offers more connection and less twitchiness than admittedly faded memories had me expect. On a warm, dry road you’ve got plenty of reassurance that the car will stick, even if you still haven’t got truly detailed steering feel. However, there are times – mainly in cool, damp conditions – when there are hints of the spiky original. It’s best to treat the S2000 with care on slippery tarmac. 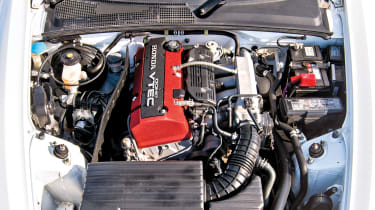 What it requires you to do is build a sense of what’s happening where tyres meet tarmac. But you can only do this by combining the fragmented and sometimes patchy feedback you get from the front wheels, the steering wheel, the rear wheels and the seat of your pants. For a while it’s a bit like making a jigsaw without the benefit of a picture to work to, but stick at it and slowly the S2000’s intentions become more clear, at which point you can explore the limits of grip and traction without feeling like you’re one step behind the car.

What you come to appreciate is that the S2000 relies on the right road for the driving experience to crystallise into Honda’s vision of what a no-nonsense sports car should be. Awkwardly paced traffic ruthlessly exposes the lack of torque – overtaking slower cars requires much forward planning, patience and effort – but if you get a clear run the S2000 enters a zone few cars can get close to. There’s a race car focus and steely resolve about the way it chases revs. Second, third and fourth gears have tremendous reach, certainly enough to string most corners together, and the noise that engine makes when working fit to burst is something otherworldly. If you’ve never been in an S2000 before you’d be shocked by the intensity that comes with such high revs and its furious work-rate.

If, like me, you look for a sports car to have a complete and well-matched skill set, it’s regrettable that Honda blessed the S2000 with an engine and gearbox that are so clearly at the top of their games while the steering and chassis lack the same level of detail development, finesse and absolute precision. 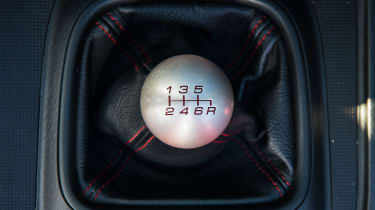 Still, you’d have to be a cold-hearted soul not to concede that there’s much to be said for a car that aims for the highest highs in one or two areas, even if that pursuit results in other areas of arguably equal importance falling short. How much value you place on the unquestionably stand-out areas depends on how long you’re prepared to wait for those fleeting, crazy, full-on moments that define the S2000. For some that rush is priceless, for others it can never compensate for the dynamic shortfalls or the all-or-nothing performance of the engine.

So the S2000 remains a work of flawed genius. One capable of delivering moments of absolute inspiration, but laced with spells of abject frustration. Same as it ever was, then, except the passage of time has only served to intensify those facets of its character that have never been anything less than electrifying, while softening the impact of the chassis’ shortcomings.

For diehard fans it matters not that the planets rarely align perfectly enough to experience the full ferocity of that high- altitude VTEC zone, at least for sustained periods. What matters is that, when they do, there’s nothing quite like the way the S2000 homes in on 9000rpm. Or how it connects you so completely to the process of wringing-out every last drop of performance. For that alone we have to salute Honda’s single-minded sports car. There never was, and never will be, anything else quite like it. 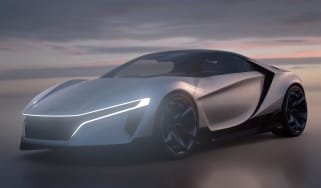 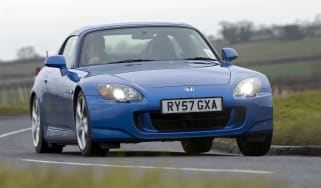 Is a new S2000 any closer to production? 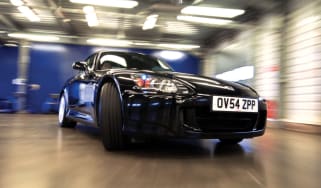 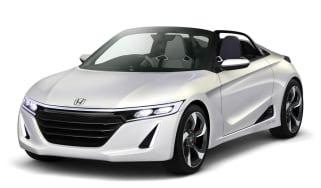 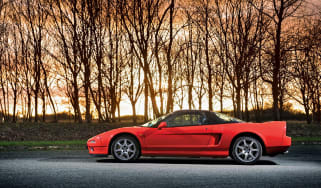 The NSX was a bit tame by supercar standards; not so the track-bred NSX-R
Visit/honda/s2000/6240/honda-nsx-buying-guide 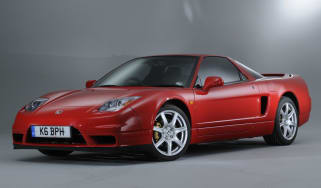 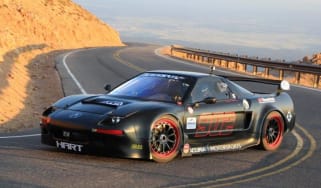 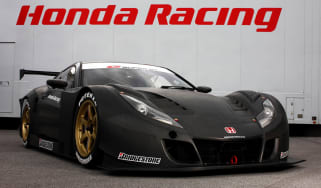 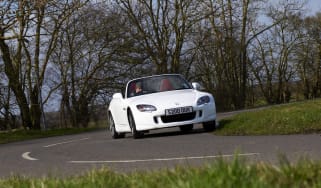 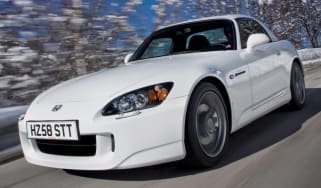 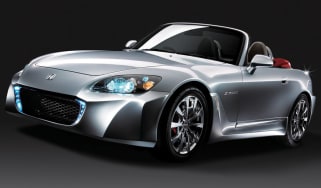 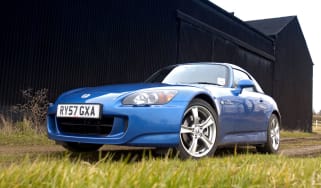 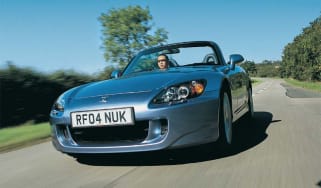 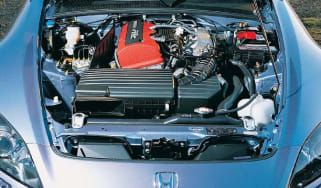 I made a complete arse of myself this month as I negotiated a busy, wet roundabout. As the Honda slithered sideways, onlookers must have thought it wa…
Visit/honda/s2000/7449/honda-s2000-gt 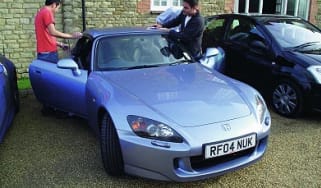 At last I have taken the Honda on track for a bit of a jolly. The rear was quite snappy, judging by chief photographer Morgan's 360deg spin on his fir…
Visit/honda/s2000/7411/honda-s2000-gt 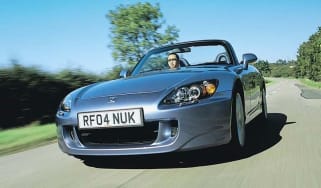 Judging by the emails I've received this month, Honda S2000 owners are a hardy bunch. They now think I'm a bit limp-wristed after I mentioned that my …
Advertisement
Skip to HeaderSkip to Content