The £130,000 Honda NSX hybrid supercar is actually quite hard to pin down. In essence it is a bit like a mini Porsche 918 Spyder with its combination of a petrol engine, electric motors and four-wheel drive. Rather than the Porsche’s 4.5-litre naturally aspirated V8, the NSX has a twin-turbocharged 3.5-litre V6.

We’ve almost become inured to the look of the new NSX having seen it on motor show stands over the last few years. But although it can appear a little fussy at standstill, it looks superb in motion and the impact of the wide, angular rear is terrific, helped at night by lights that stretch the full width of the car.

On the move the Honda is almost as exciting to drive as it is to look at, although it’s not without its quirks. Arguably the coolest is the ‘Quiet’ mode, which allows you to run in zero tailpipe emissions electric mode. You can’t go all that far (this isn’t a plug-in model, the so the batteries can only store enough charge for shortish, low speed squirts), but it’s somehow thrilling being able to slip around town in hushed silence. The rest of the time the motors operate to deliver McLaren P1 style torque-fill, gifting the Honda with, ahem, electrifying acceleration. With instant response and four-wheel drive traction the NSX fires down the road with real violence, although the neck-straining urge tails off a little as you stray deep into three figure speeds. 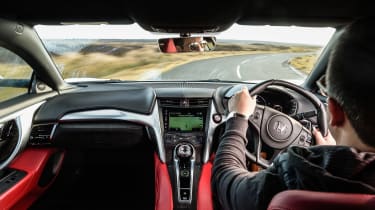 All this complexity comes with an unsurprising weight penalty, yet despite its not inconsiderable mass the NSX handles with agility and poise, helped in no small part by those electric motors, which enable power torque vectoring, tucking in the nose and delivering an extra dose of torque to the rear axle for genuine throttle adjustability. It’s just a shame the quick steering is rather lifeless. When you’re not driving with indecent haste the Honda is as refined, easy-going and, eye-swivelling dash layout aside, as simple to live with as a Civic.

Engine and gearbox > hybrid drivetrain is beautifully integrated, while the nine-speed twin-clutch is a quick and smooth ally

Ride and handling > given its weight, the four-wheel drive Honda is agile and engaging, plus rides with reasonable suppleness

MPG and running costs >  it’s not exactly eco-friendly, but hybrid powerplant means NSX is nearly as efficient as a Civic Type-R

Interior and tech > cabin looks the part, what with its digital dials and beautiful finish, but layout is a little haphazard

Design > it perhaps tries a little too hard, but chiselled and low-slung Honda is every inch the exotic 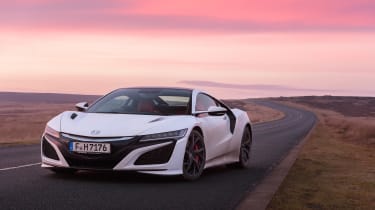 The naturally aspirated trio of the Porsche 911 991.1, first generation Audi R8 V10 Plus and Ferrari’s 458 provided the benchmark for the second coming of the NSX. These cars represented the supercar establishment during the NSX’s development, but since then the McLaren 540C, the soon to be replaced Porsche 911 Turbo and recently revised Audi R8 V10 Plus have upped the ante in this fiercely contested segment.

The Audi R8 V10 Plus occupies the same financial bracket and sticks to the old naturally aspirated school of thought – the last model still doing so in the mainstream supercar arena. The NSX suffers over a 30bhp deficit to the R8, but boasts significantly more twisting power with 476lb ft of torque compared to the R8’s 413lb ft.

The Honda flagship also has competition from McLaren’s entry-level 540C, in essence a cheaper 570S. Retaining all the granular tactility of the 570S, but with a little less outright go (although you’d struggle to tell on the road, where it delivers the same laggy whizz-bang power delivery of the more expensive version). The Woking-based supercar may drop a few car lengths to the NSX when both are driven in anger, but it is the more engaging to drive of the two. 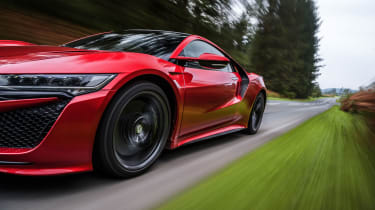 The Porsche 911 Turbo’s list price places it in NSX territory. Little more needs to be said of the 911 Turbo’s phenomenal point-to-point pace, which exists within the practical 911 package that can even accommodate a pair of (toddler-sized) passengers in the second row – a unique feature amongst these rivals. It’s about to be replaced by the all-new 992, but it’s still at the top of its game.

The BMW i8 is the NSX’s closest rival in terms of technical anatomy. A single electric motor deploys power at the front axle to supplement the 1.5-litre petrol unit driving the rear; the combined output of the hybrid powertrain is 357bhp. The BMW i8 though, operates on a lower, sports performance plain rather than supercar echelon within which the NSX competes. Incidentally, the i8 also undercuts the NSX by about £30k.

Honda NSX gets upgraded for 2019 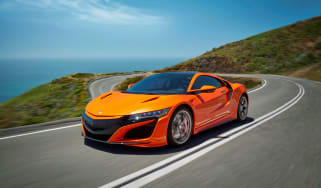 Honda NSX gets upgraded for 2019

Chassis tweaks, a facelift and a new colour for the hybrid supercar
Old vs new: Honda NSX Tokyo shootout 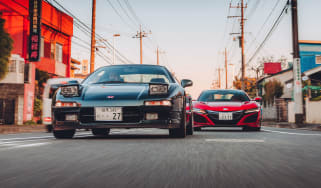 We drive the first and last Honda NSXs in Tokyo to see if the adoration is universal across the generations.
Honda announces new GT3 NSX race car 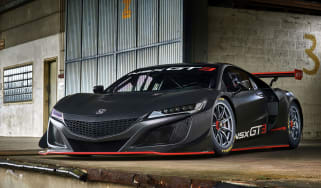 After taking wins in America last year, Honda has made its NSX GT3 available for customers to buy
Honda develops electric NSX for 2016 Pikes Peak event 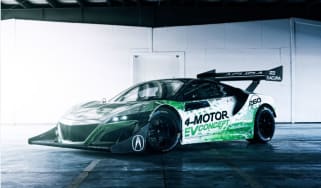 With three times the power of last year's Honda entry, the NSX is one to watch at 2016's event
Honda NSX GT3 announced - ditches hybrid tech and goes rear-wheel drive 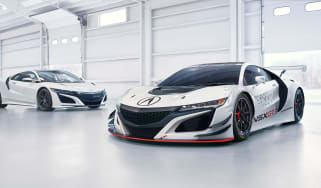 With the all-new NSX previewed next month, Honda celebrates its legendary supercar with a video montage
Mugen CR-Z revealed 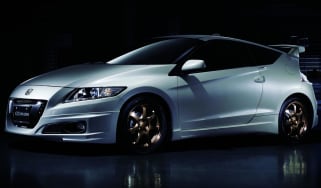 Want your CR-Z to have more show? Mugen, Honda's tame tuning firm, has released a tuning pack for the hybrid
Honda NSX racer 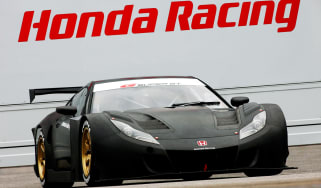