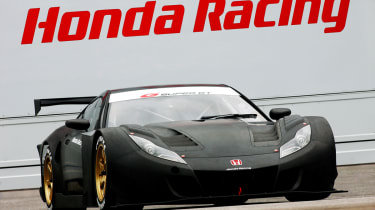 The Honda NSX may have been killed off, but word is that it’s going to be reborn as a racing car. The replacement for the legendary Japanese supercar was axed well into its development phase, as Honda’s focus shifted from full-strength drivers’ cars to hybrids and green technology. While its newest hybrid – the CR-Z sports coupe – looks set to crank the fun up somewhat, Honda’s halo car will be sorely missed, especially with the 5-litre V10 engine it was due to sport. Instead, though, it looks like it’ll see the light of day as a racing car in Japan’s Super GT series. It’s involved the sidestepping of the homologation rules, using a rule that allows production-ready cars that aren’t in production to enter. Rather than a ten-cylinder unit, reports suggest the racing NSX will use a 3.4-litre V8 engine. It’ll be mated to a rear-wheel-drive layout.  Just as importantly, it looks bloody tremendous. Whether you're a motorsport fan or not, you've got to admit it's a pretty cool piece of kit...