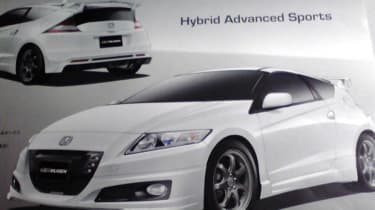 The Honda CR-Z's brochure has leaked out onto the internet. Bad news for Honda, but good news in our eyes, as the road-going version of the hybrid sports car looks remarkably like its preceding concept. In fact it’s hard to spot anything that’s actually changed. The only tweaks we’ve strained our eyes to see are less intricate alloy wheels and head and taillights, making this one of those rare cars that’s progressed from striking concept phase to showroom reality almost fully intact. That can only be a good thing, the CR-Z looking every inch the modern sports coupe, with the new Renault Megane and Volkswagen Scirocco firmly in its crosshair. There's even going to be a Mugen version... Unlike its pair of European foes, though, it’s a hybrid. In the spec described by this brochure, though, it looks set to lag behind its more traditionally powered rivals. It suggests the modern-day CRX will pack 113bhp (delivered at 6000rpm) and 107lb ft of torque (at 4800rpm) from its 1.5-litre petrol engine and 13bhp (at 500rpm) and 58lb ft (at 1000rpm) via battery power. Totals of 126bhp and 165lb ft and a 9.7sec 0-62mph-time fall short of the 158bhp Scirocco 1.4 TSI. The CR-Z – unusually for a hybrid – will come with a six-speed manual gearbox rather than an automatic or CVT system, potentially making it a bit of a drivers’ car with some eco credentials. Expect to pay around £18,000 when the CR-Z comes to the UK, with sales expected from summer 2010. Follow evo on Twitter for the latest performance car news