Think the new Golf GTI and Scirocco TSI are the same car in different clothes? So did we – until we brought them head to head. So which is best? 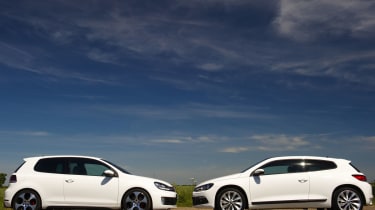 They’re very different to drive. This is good news. The fear had been that we’d get the new mk6 Golf GTI on the same roads as the Scirocco 2.0 TSI and discover that we couldn’t tell them apart. Not so. In fact some of the differences are striking, and not all of them favour the newer car.

But there’s a tale to tell here, so let’s start at the beginning. These cars are not identical under the skin. Although both still have plenty of carry-over from the mk5 GTI, the Scirocco deviates from the platform-sharing gospel. It features the back axle from a Passat, wider tracks and unique suspension settings. The new GTI follows its predecessor’s lead more closely, although the turbocharged 2-litre engine has gained an extra 10bhp here (bringing the total to 207) and there are two new driver aids – ACC (Adaptive Chassis Control, standard on the Scirocco but £705 on the Golf) and XDS (Extended Elektronische Differenzialsperre, a pseudo LSD that’s unique to the GTI).

Nevertheless, we went out of our way to make sure our two cars were as similar as possible: white paint, manual gearboxes, ACC. Nose to nose under spring skies a few things jump out, chiefly the Scirocco’s higher ride height and the Golf’s more overt sportiness. The hot hatch’s detailing is more showy now, self-conscious rather than self-assured. Inside, the hatchback somehow manages to look fresher and more modern than the coupe, even though fewer than 12 months separate them. It definitely has the better seats too, the extra lateral support hinting at extra lateral grip.

Spot on – although it takes me a while to work my way up to that level. The new GTI is fearfully competent. Does that concern you? It should. True, the last Golf was not a raw, trembling ball of energy either, settling for being richly satisfying instead, but in the new one you really have to go looking for entertainment. Cruise around and the stunning damping composure means the car is always too much in control, too able. So you hurl it into a tight-ish third-gear corner. Aha… now we’re talking. Now the steering is more alert, now you can feel what’s going on, now the front end sharpens up a treat. Now it’s a GTI.

It’s a neat trick, a sudden sense of layers pulled back, true character revealed, but it’s also frustrating knowing how hard you have to drive it to have fun. In comparison the Scirocco feels almost Italian – rougher round the edges, more reactive to the road surface, less supple. These are not things I’ve ever noticed about the Scirocco before, which goes to show just how awesomely capable the GTI now is. The Scirocco gives you more information, more of the time, but it’s like comparing AM and FM radio signals – do you actually want all the extra background fuzziness? The Golf is a brilliant filter, giving you only the information you need – provided you’re going fast enough to keep it interested.

In the coupe you sit a touch further back within the wheelbase, but because the rear end isn’t particularly playful (and, besides, the DSC can’t be disabled) there’s little gain to be had. If anything the extra distance just makes the nose feel that bit more numb on turn-in. But at the exit the lower, lighter Scirocco is the more gutsy. In the Golf there’s a momentary bogginess, possibly caused by the XDS trying to apportion power, but more likely due to the fact that the GTI is a few bhp short of full, 2009 hot hatch membership; 207bhp ain’t quite enough these days, especially when the power delivery is as smooth and sophisticated as the chassis. Here, once again, the Scirocco comes across as gruff, the exhaust more rorty (a good thing), but with detectable dips and crests in the power curve.

Which is faster? There’s nothing in it, but the sensations of speed – the things we crave in day-to-day driving – are more ably delivered by the Scirocco. The GTI, although deceptively rapid, is too quiet, too linear, too grown up. For those reasons it also just misses the mark of what made the mk5 so special; it’s not quite so tuned in to what we need or want from a hot hatch. Is the mk6 better than the Scirocco? Yes, but that’s the wrong question, too black and white. The real answer depends on you and how you like your driving thrills served up.