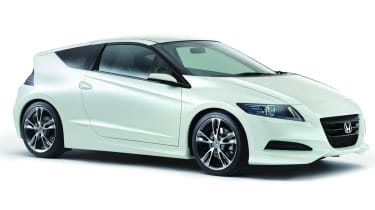 Honda has unveiled its modern day CRX. While still officially a concept, this CR-Z is 95 per cent production ready, and isn’t too far removed from the concept that preceded it in 2008.

And while it shares some design cues with the classic CRX sports coupe of the 1980s, this modern day reincarnation is much more advanced. It’s a hybrid, with Honda’s IMA powertrain linking a 1.5-litre petrol VTEC unit with an electric motor. While performance figures are unconfirmed, expect around 130bhp and a 0-60mph time close to the nine-second mark.

Unusually for a hybrid, the power source is mated to a six-speed manual gearbox, with self-shifters or CVT systems usually preferred to help smooth the power flow. Happily, though, the CR-Z’s more sporting nature ensures a more driver-orientated transmission.

While its looks suggest it’ll square up against the Volkswagen Scirocco, it’s a more compact car, with smaller dimensions including a 143mm shorter wheelbase. Fuel consumption of potentially 70mpg or more also embarrasses any of VW’s coupe range, including the diesel.

Like the Scirocco, the CR-Z will be front-wheel drive, with agile dynamics promised. Fingers firmly crossed.

The CR-Z will be shown at this October’s Tokyo motor show, where Honda will also be showing off another pair of concepts, which are a bit less conventional. The smallest is the EV-N, a titchy four-seater electric car whose design apes the Honda N360 (pictured red), a 360cc micro car from the 1960s.

Wilder still is the Skydeck, a hybrid people carrier that seats six. To maximise interior space, the hybrid system’s makeup is stored in the car’s centre tunnel, allowing for three rows of two seats and dropping the centre of gravity. It gets both sliding and uplifting doors, as well as a rather beak-like front end.

The latter pair merely showcases Honda’s future design and technology, but the production CR-Z will arrive rather soon. Expect UK sales by summer 2010, with prices starting at around £18,000.Follow evo on Twitter for the performance car latest