It's a hybrid, but it's got a manual gearbox and it claims to be sporty. So, is this the new Honda CRX? 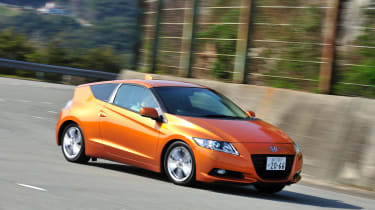 Over the past few years, Honda has tempted and teased us with the CR-Z. A new take on the classic CRX seemed to be on the cards, and that sounded eminently good news given that the CRX, especially in late-model 1.6 VTEC form, was one of the great tearaways – a brilliant little toy, banging out a hard-edged 160bhp with a musical 8000rpm red line and a great chassis to match.

Such is life, this new CR-Z turns out to be a completely different kettle of fish. A genteel, sportyish 1.5-litre hybrid, it is a car for a greener age. Indeed, Honda is talking not about high revs, but low CO2 emissions (117g/km) and fuel consumption (56.4mpg combined).

That said, this first steer of the CR-Z in Japan suggests that some of the spirit of the CRX is still alive and well. The CR-Z also seems to be a lot more than the sum of its parts, namely a Jazz-based 1.5-litre i-VTEC engine married to Honda’s trademark IMA (Integrated Motor Assist) hybrid system and wrapped up in a compact, wedgy 2+2 shell.

The driving position is excellent, while the six-speed manual gearchange (a hybrid first), and the support offered by the seat are also notable for the right reasons. However, not everyone will ‘get’ the busy dash with its myriad buttons, lights and switches. Back-seat space and rearward vision are pretty hopeless too.

To drive, the CR-Z feels a lot livelier than its 122bhp total system power would suggest, the electric motor seamlessly boosting the low- and mid-range torque being sent to the front wheels so that the Honda feels encouragingly punchy up to around 5000rpm – especially so if you select Sport in the trick ‘3-Mode Drive System’, which sharpens throttle and steering response and bumps up the level of motor assist too. (There are, as the name suggests, two other choices – Normal and Econ – and in a novel touch the outer ring of the big central tacho changes colour to suit.)

Given what the blogosphere has been saying about the CR-Z, that modest power level and the car’s 1130kg (the CRX was 970kg), I wasn’t expecting too much when I set off, but the Honda feels encouragingly sharp and agile, the suspension mods over the woefully average Insight really making a difference. Shorter, wider and with a lower centre of gravity, the CR-Z also gets its own stiffer front-strut/rear torsion-beam suspension set-up, including aluminium lower front arms. You can tell within the first 500 yards that the CR-Z is both firm and decently responsive, the bodyshell also taut so that the car feels a cohesive package.

If you’ve got this far, you’ll probably grimace at Honda’s description of the CR-Z as a ‘hybrid café racer’, but that actually sums it up pretty well. It’s not specifically aimed at enthusiasts but more at Mini-type ‘premium compact’ buyers who like the idea of a small, techy hybrid coupe and the green message that comes with it. Hey, this is 2010…

Even so, up and over the Nauto Skyline, a particularly windy and entertaining mountain road, the CR-Z proves surprisingly effective. There’s good grip from the 16in Potenza RE050As and the car feels well balanced, wieldy and entirely competent as it darts in and out of corners, the steering accurate, well- weighted and consistent.

Ultimately, though, the CR-Z gets out of breath if you push too hard. The engine sounds loud and hard as it spins around to the 6500rpm cut-out (just where the CRX got going…) and as grip starts to run out, so it gets understeery, dull and inert in a way the wild-child CRX never did. Don’t even think of taking a CR-Z to a trackday.

While it might, in the end, be short on driving thrills, this hi-tech little Honda is not without its appeal and, yes, more spirited Mugen and Modellista versions are already on their way, in Japan at least, to spice up the show. 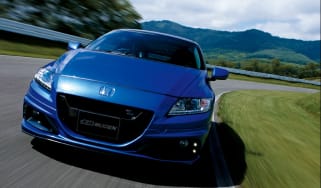 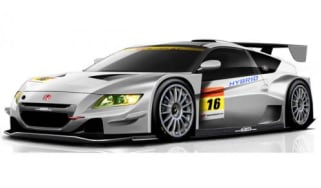 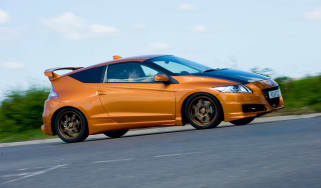 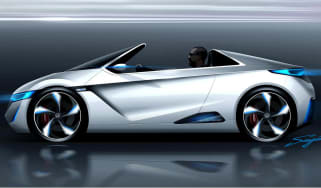 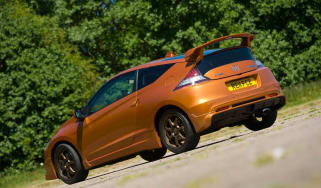 Honda has created a hot hatch hybrid with the CR-Z Mugen complete with supercharged engine. It's green, but is it good to drive?
Visit/honda/cr-z/11785/honda-cr-z-mugen-video 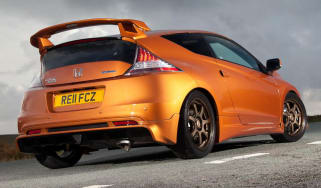 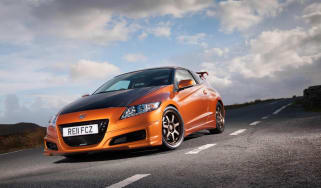 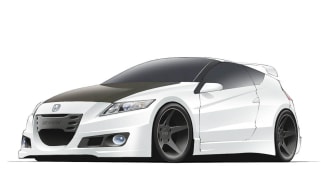 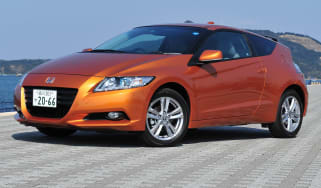 Honda claims this is the first hybrid sports car. Does the reborn CRX impress?
Visit/honda/cr-z/10601/honda-cr-z-coupe 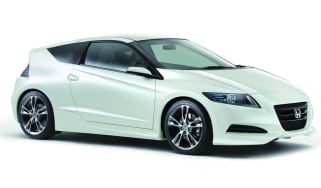 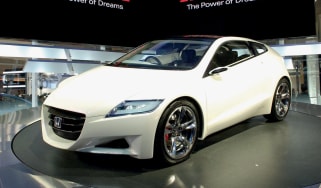 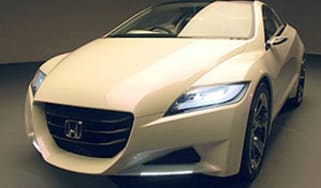