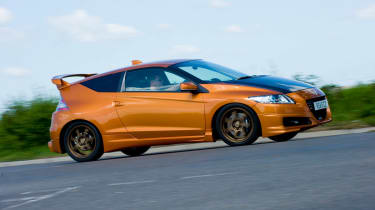 The Mugen version of the Honda CR-Z hybrid coupe has been confirmed for production, with UK sales beginning in February 2012. The price has yet to be announced but Honda insiders say we should expect to pay around £23,000, which seems pretty good value considering the Mugen CR-Z’s gains over a regular, £18K CR-Z. It gets a supercharger and a remapped ECU, boosting power from 122bhp to 197bhp and torque from 128lb ft to 158lb ft.  Buyers will be able to choose from a whole range of other Mugen modifications too, including stiffer springs and dampers, larger wheels, bigger brakes and replacement carbon bonnet and doors. The standard CR-Z’s supplementary electric motor hasn’t been modified in any way during the Mugen conversion.

And with identical power and a similar price tag, the Mugen CR-Z should prove an intriguing rival to the freshly revealed Toyota GT 86. Honda admitted the lack of Type-R performance versions of its current cars (particularly Civic) meant it’s losing some of its traditional enthusiast buyers to other car brands. Honda hopes by offering the CR-Z Mugen as an official model early next year, it will tempt buyers back, while it continues to develop an all-new Civic Type-R, which will be revealed in a few years time.

Full details and picture gallery of the Toyota GT 86