The Toyota FT-86 sports coupe concept has been made real at last: meet the production GT 86, affordable rear-drive fun 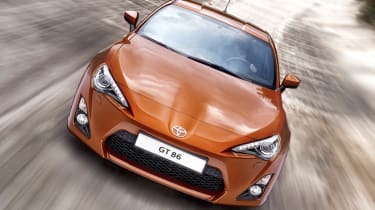 The wait is over and you’re finally looking at the production version of Toyota’s new lightweight sportscar – now officially named the GT86.

Set to be unveiled at next week’s Tokyo motor show alongside its Subaru BRZ cousin, the GT 86 is set to offer buyers a compelling set of headline figures. Power comes from a newly developed 197bhp 2-litre Boxer petrol engine and is delivered to the rear wheels via a six-speed transmission and a limited slip differential. The kerbweight of 1180kg is actually less than that of a Renaultsport Clio, despite the fact the Toyota packs a two-plus-two seating configuration.

Although no official times have been released yet, figure on a 0-60mph time in the low six second range and a top speed of around 140mph. Even more impressive is the fact that – to judge from a rough translation of the car’s Japanese eco figures – it should be capable of delivering around 40mpg.

It’s fair to say that the production version has lost some of the elegant simplicity of the FT-86 concept that was shown at the Tokyo motor show two years ago, growing visibly bigger overhangs front and rear and a higher bonnet line. It’s still a remarkably compact car, though – at just 4.2 metres in length it’s actually shorter than a Porsche Boxster (although the Toyota’s wheelbase is 100mm longer.)

Inside the cabin the seating position is relatively cosy, although it’s been designed to accommodate taller European and American drivers. The rear seats are small, but usable and although there are plenty of Subaru switches, the overall quality of components feels high.

The car has been engineered by Subaru, and mechanically it will be near identical to its BRZ cousin. Both are powered by a horizontally opposed four-cylinder engine which displaces 1998cc and which delivers its power through a combination of natural aspiration and revs. The red line is set at 7300rpm and peak power of 197bhp is delivered at 7000rpm, with the relatively modest 151lb ft of torque delivered at a peaky 6600rpm.

Buyers will be able to choose between a conventional six-speed manual gearbox or a six-speed auto transmission with standard steering wheel over-ride paddles. Toyota is happy to confirm that, in addition to a more permissive ‘Sport’ mode, the VSC stability control system can be fully deactivated. This is a car that’s been created to go and play on low grip surfaces.

British buyers will have to wait until next summer to take delivery, but we’ll be reporting driving impressions well before then. Prices have yet to be confirmed, and early rumours of a sub-£20k pricetag are well wide of the mark, but - depending on exchange rates - you should be able to buy one for around the £25,000 mark.

Update: Toyota has released this mildly cheesy video of the GT 86 in action...