Honda has created a hot hatch hybrid with the CR-Z Mugen complete with supercharged engine. It's green, but is it good to drive? 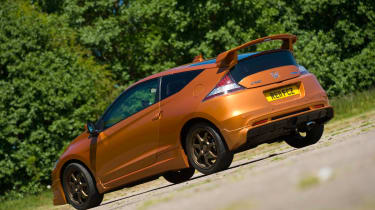 The Honda CR-Z hybrid coupe, with added Mugen performance. It’s a one-off prototype worth about £150,000, but if reaction is good, a limited-run hot hatch (like the £40K Civic Type-R Mugen) could follow.

Lots. The CR-Z’s combination of electric motor and 1.5-litre petrol power remains, but the latter gains a supercharger, upping total power and torque figures to 197bhp and 158lb ft, respective rises of 75bhp and 30lb ft.

There are also new five-way adjustable dampers, a wider front track, more powerful brakes (320mm vented and grooved discs with four-pot calipers up front) and 52kg less weight compared to a standard CR-Z. This comes courtesy of a carbon bonnet and doors, sports front seats and the deletion of the rears. Overrall it’s enough to yield a 185bhp/ton figure, which is a whopping 80 per cent more potent than the standard car.

Pace is impressive, the electric motor’s low-down grunt enough for some amusing torque steer before the supercharger comes on song and you’re carried up the road with a useful lick of pace. The standard six-speed gearing is a disappointment, though; hang onto all the revs and when you change up a ratio, you drop just out of the supercharger’s powerband, so acceleration can feel a little stunted.

Cornering ability is much stronger than a regular CR-Z, and closer to Honda’s Type-R range for both entertainment and composure, with body-roll far less evident. The fitment of semi-slick Yokohama Advan tyres endows this Mugen with more grip than power; we’d prefer a good set of road tyres and a bit more playfulness.

A Renaultsport Megane 250 is more powerful, practical and much cheaper. But potential buyers are likely to be those happy to pay used M3 money for a limited edition hatchback, much like Mugen’s Civic Type-R, so chances are if you want one, you’ll be digging out Honda’s phone number now.

The Honda CR-Z Mugen makes its public debut at the 2011 Goodwood Festival of Speed on July 1.