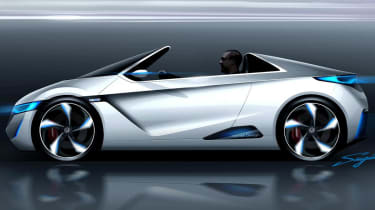 Honda will preview a return to the performance car market at the 2011 Tokyo motor show. It will display the ‘Small Sports EV Concept’ (main picture), and while there’s scant information available prior to its December debut, it sits neatly with the company’s rumoured plans to introduce an efficient sports car to its range.

Its targa body recalls that of the legendary Honda NSX supercar – partly developed by Ayrton Senna – a replacement for which has been the subject of intense speculation recently. Honda has said any new performance vehicles would be about efficiency and strong power-to-weight figures rather than outright bhp, and the concept’s electric drivetrain is said to be ‘fun to drive while achieving excellent environmental performance’.

Its name suggests it will be smaller in size than the NSX, so could sit between the V6 coupe and Honda’s S2000 sports car in size and stature. Its lack of front and rear overhangs and high waistline suggest the battery packs sit between the driver and the floor, usefully lowering the car's centre of gravity to aid dynamics. A production model is likely to be more than a year away.

Another concept car with a nod to performance is the AC-X, a sporty-looking saloon. It’s a plug-in hybrid and it’s designed to satisfy those who enjoy ‘spirited driving’ as well as the more environmentally conscious thanks to different drive modes. Its styling could preview the next-generation Insight hybrid.

Honda will have six other concepts on display at Tokyo; three motorcycles, including a 250cc-like electric sports bike (the RC-E), two city cars, the Micro Commuter and the N Box, and a curious mobility scooter called the Townwalker, which is designed to fold neatly into the car when not in use. The Small Sports EV Concept is likely to be the Honda stand's star, though.