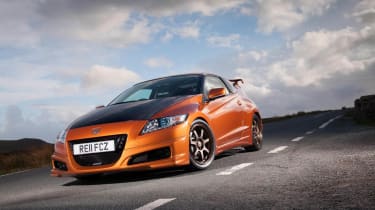 These are the first official pictures of the Honda CR-Z Mugen hybrid coupe. It is due to make its world debut at the 2011 Goodwood Festival of Speed at the beginning of July.

The Mugen carries over the standard model’s electric motor and the 1.5-litre i-VTEC petrol engine, which has been supercharged to produce 200bhp and 181lb ft of torque.

Colin Whittamore from Mugen Euro said ‘the idea was to use the significant advantage of the early torque provided by the Honda IMA electric motor, then increase the torque available from the petrol engine gradually, to first maintain and then increase this. A supercharger and complementary electronics allow us to very neatly map the IMA to the extra power and torque of the engine in a unique package, giving a smooth, integrated and powerful driving experience.’

Weight has been reduced by 50kg and there are new dampers and larger brakes. Exterior modifications include new front and rear bumpers, new side skirts, rear spoiler and Mugen GP 17in forged alloy wheels.

Even though driving performance was the priority of the project, Mugen hasn’t ignored fuel consumption and economy, the car still employing the three driving modes of the standard car. It claims 50mpg-plus in ‘eco’, the greenest mode.

Honda claims there are no plans for production, but as a supposed spiritual successor to the CRX, the normal CR-Z has always lacked the sporting credentials promised by its moniker. The Civic Type-R Mugen went into limited production, so fingers are firmly crossed this will too.