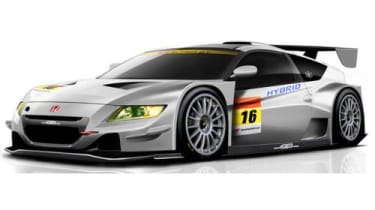 Honda-Mugen has announced it will be entering the GT300 class in the Japanese SuperGT race series with a CR-Z based racing car. Early images looks promising and it will field the first hybrid drivetrain in the series, paving the way for other manufacturers to follow suit.

There’s not yet much to report on in terms of performance figures, but in order to compete with the SuperGT series’ 458s, Vantages, Gallardos, Z4s, and 911s to name but a few, it’s going to have to be fast. It will also have Subaru’s wild 300bhp BRZ GT300 racer to beat.

The announcement comes in the same week Honda revealed it will enter the World Touring Car Championship (WTCC) this season with the new Civic, pictured right. In line with the FIA’s Super 2000 regulations, its power will come from a turbocharged, 1.6-litre four-cylinder engine. Both are promising moves (following Honda’s F1 drop-out in 2008) and strengthen the company’s new performance car plans, headed by a new NSX supercar.