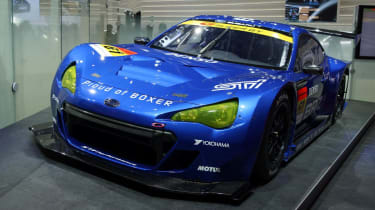 Subaru has only just unveiled its all-new BRZ sports car, yet the Tokyo motor show has already provided a glimpse of the Super GT racing version. The new model should compete in Japan’s 2012 Super GT Series in the GT300 class and will be hoping to build on the success of Subaru’s previous entry, the Legacy B4 GT300. The class is contested by everything from Lexus IS350s to Ferraris, Porsches and Corvettes. Not a great deal of information has been released about the racer, but it is likely that the car will use a 300bhp version of the road car’s 2.0-litre boxer engine. The BRZ GT300 also receives the usual race treatment with a wider track, pumped up arches and a huge rear wing.  It looks great, and being the creation of Subaru’s STI performance arm, whets our appetites nicely for an STI road car, much like the pumped-up BRZ concept shown at the LA motor show recently. Fingers crossed.