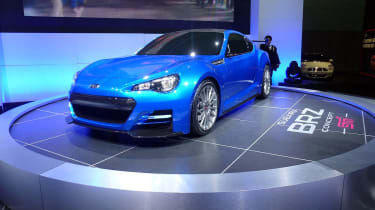 We certainly wouldn't blame you if you're starting to get bored with the very slow unveiling of the new Toyota and Subaru sportscars.

We know that production versions are going to make their debut at the Tokyo motor show in just two weeks time. But before then, Subaru has shown another broad-hint concept of what the finished car will look like, this time an STI version.

On the Subaru stand at the Los Angeles motor show it was a fine-looking concept, complete with STI's trademark Mica blue paintwork and a massive rear wing that we're betting is unlikely to make production. Under the body we know that power for both Subaru and Toyota versions of the car will come from a Subaru-developed 2-litre flat four engine. Despite previous reports that the two versions would be distinguished by different power outputs, a Subaru insider at the show insisted that both cars would have identical engines and figures.

Now all we need is to see the finished product.