Honda CR-Z to be made 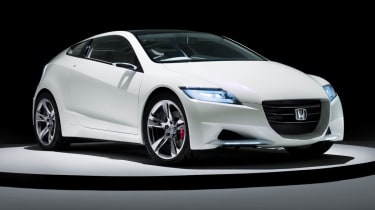 Honda is putting its CR-Z hybrid coupe into production. The concept (pictured) is a nod to the classic CRX of the 1980s and 90s, and received a rapturous response when on the motor show circuit last year.

We thought it’d never happen after Honda ditched the NSX replacement and quelled any chance of the S2000 roadster being superceded anytime soon, seemingly turning its back on any sporty avenues in its range.

The green twist the CR-Z comes with (apparently it stands for ‘Compact Renaissance-Zero’) is likely to have been a big helping hand in pushing it towards production, though. It’ll sit alongside the new Insight in Honda’s hybrid range and is set to gain the Prius-rival’s front-wheel-drive layout and 1.3-litre, 100bhp petrol unit mated to a sprightlier electric motor that should see torque approach 200lb ft and boost the horsepower by around a third, too.

It’s set to boast a light kerbweight to make sure that a low-ish power output and a reasonably clear conscience needn’t stifle the fun. Whether it pans out remains to be seen, but the enthusiasm of Honda’s new CEO Takanobu Ito to get it into production is promising.

Sales are set to start in Japan in February 2010, with a UK production date announced later this year – but sometime in the second half of 2010 seems likely.