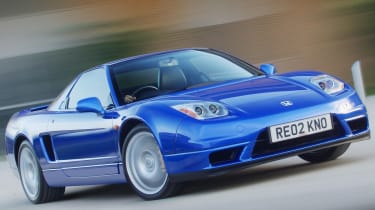 Honda has cancelled the mk2 NSX supercar as it aims to cut costs and focus development elsewhere. Less than two weeks after quitting Formula One, the company has culled its 5.5-litre V10 with attention diverted to hybrids and CO2 cuts.

Honda CEO Takeo Fukui confirmed all development on the NSX will cease, while just a few months back we were expecting an NSX concept at January's Detroit motor show. Instead, funding will go towards the brand's army of environmentally friendly motors - the FC Sport, FCX Clarity, CR-Z and Insight.

Difficult time in the car industry has led to Honda, Suzuki and Subaru all canceling or suspending motorsport participation in the last fortnight. The loss of a new NSX will be a particularly sad one for fans of the Ayrton Senna-developed original (pictured), ranked as one of the great motoring icons. Nissan and its GT-R are probably breathing a sigh of relief, however.