On the road the NSX feels incredibly capable but also extremely composed. Speed, and lots of it, is easy to find and easy to carry through corners. But it’s the way it exits corners that is most remarkable; the torque vectoring and electric motors on the front axle mean you can be on the power exceptionally early without any loss of traction or worry you won’t stay on your desired line.

The steering wheel is a similar size and shape to a Ferrari 488’s and the idea is that you shouldn’t have to move your hands from the quarter to three position. The rack obviously has to be quick enough to allow this and it is, although it has none of the nervous or twitchy feelings that you can get with Ferraris.

The wheel does have some feel through the electric power-assistance too and it talks to you at low speeds, which is good, but strangely it’s not a very mechanical feeling helm. In fact the NSX goes about the business of going quickly with, seemingly, very little involvement from the driver. No sort of adjustment or correction is ever needed; you don’t even feel what the drivetrain is doing other than the exceptional speed it has helped generate. 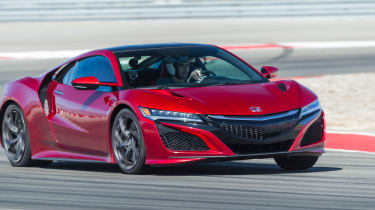 It takes a lot before you start to feel on top of the NSX; a lot of speed and a lot of commitment. It feels so unshakeable, even at such high speeds, you begin to fear how it might react if you did ever reach its limits. As you edge closer and closer to the extremes of the NSX’s abilities you do begin to feel what its clever four-wheel drive system is doing. You also start to feel the NSX’s mass and you can begin to use that to manipulate it around corners; you feel the rear axle go light as you trail brake heavily into tight corners, the car then rotating towards the apex.

The nose will begin to push wide when you do start nudging the very high limits of grip, but it feels perfectly natural to lean on this very mild slip, working with it all the way through a long corner until you feel confident getting hard on the throttle as the bend opens out. At which point the balance will switch nicely to the rear. The NSX feels much the same on the track as it does on the road, but the space and freedom allows you more opportunities to appreciate how it feels at the edge of its limits.

Perhaps the most impressive thing, however, and something that sums up the new NSX is the braking. It is fly-by-wire and has to meld the wonders of regenerative braking with the more conventional forces of pads on carbon discs. Instinctively I was mistrustful of the idea of the brake pedal being attached to a switch, but if you didn’t know you wouldn’t guess. Full of power and easily modulated, the brakes just felt very natural. And it’s really the same for the rest of the car, because despite all the technological wizardry it is harnessing, the NSX feels quite natural and intuitive to drive. 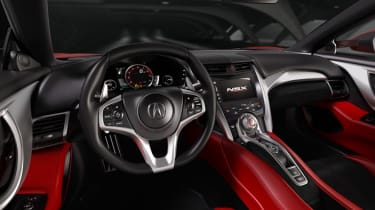