There’s not denying it, the NSX is something of a looker. While the original has gone down in history for its sublime handling and screaming motor, few will rate it’s ungainly looks – but that’s not the case here. All sharp curves, creases and hunkered stance, the American-styled NSX arguably wins its membership to the supercar club on styling alone.

It’s not just a pretty face either, because lots of attention has also been paid to the aerodynamics, in particular to reattachment of the airflow behind the front wheels. The aim of this is to better channel the air through the intakes by the C-pillars. At this point the air is split between flow into the intercoolers, flow across the top of the rear deck and a stream that emerges from a small slit above the rear lights. Crucially, unlike rivals such as the Porsche 911 Turbo the Honda doesn’t rely on active aerodynamics – there are no moving planes or switchable surfaces here.

Under the skin the construction of the car is not particularly advanced, with no carbonfibre to shout about. However, there is a world-first application of ablation cast aluminium. It has the stiffness of a normal casting and the ductility of a forging, which means the parts can be used as attachments points for the suspension while also acting in the front and rear crash structures. 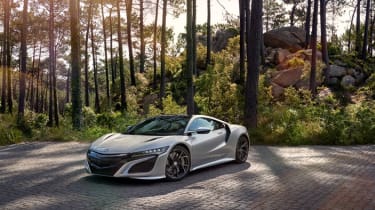 Typically for a Honda, the front suspension uses a double wishbone set-up, but at the rear there’s a complicated multi-link arrangement. As well as third generation magnetic ride dampers, the NSX’s handling is helped by (deep breath) Sport Hybrid Super Handling All-Wheel Drive. The key component of this is the torque vectoring available using the twin motors at the front. The limited-slip differential on the rear axle is also brought into play to create something called Direct Yaw Control, which essentially helps make a heavy car (1725kg) feel much lighter and more nimble than it should. Steering is electrically assisted and utilizes a variable ratio rack.