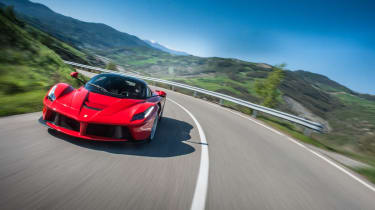 The Ferrari LaFerrari - or, as Ferrari would prefer us to say, simply 'LaFerrari'. It's one of a trio of near-legendary cars, joined irrevocably with the McLaren P1 and Porshe 918 Spyder to form what plenty of petrolheads have named 'The Holy Trinity'. The LaFerrari follows in the footsteps of Ferrari's most legendary cars - 288 GTO, F40, F50 and Enzo - but for the first time adds an electric motor to the V12 petrol engine, creating a performance hybrid with F1-style KERS system. The LaFerrari's price topped £1 million when new, but that's irrelevant - it's long since sold out.

The 6.3-litre V12 revs to 9250rpm and develops 789bhp at 9000rpm for a specific output of 128bhp-per-litre. Maximum torque is 516lb ft at 6750rpm. This is supplemented by an electric motor that drives directly through the differential (not the gearbox, as in the P1), spins at 16,500rpm and contributes a further 161bhp and 199lb ft. Together with the batteries, the combined weight of the hybrid system is 146kg - roughly half that of the admittedly beefier 918 Spyder’s hybrid system. It more than pulls its weight, improving acceleration by 20 per cent and delivering a 50 per cent reduction in CO2.

The headline performance figures are a 0-60mph time of ‘less than 3sec’ and a 0-124mph time of ‘under 7sec’. At 1m20s, the LaFerrari’s Fiorano track time is also 5sec quicker than an Enzo and 3sec quicker than the F12 Berlinetta, which it displaces as Ferrari’s fastest ever road car. The top speed is quoted as over 217mph. It combines this performance with a claimed 220g/km of CO2 in hybrid mode – lower emissions than a Lotus Exige.

Active aerodynamics see front and rear diffusers, an underbody guide vane and a rear spoiler all react and deploy automatically when driving conditions require. This generates downforce without unnecessarily compromising the car’s drag coefficient. Both the hybrid system and active aero integrate into the rest of the LaFerrari’s dizzying electronic systems, including F1-trac and E-diff. There’s a Brembo carbon-ceramic brake setup, while the 19in front/20in rear alloy wheels are wrapped in Pirelli P Zero rubber.

The hardware might be thoroughly modern, but LaFerrari’s heart remains a screaming naturally aspirated V12 engine. More like a force of nature than something man-made, it owns your senses, its pulsing beat sending all manner of subtle vibrations into you through the structure of the car.

Where the real magic happens is in the way the electric motor makes its contribution. The ultimate silent partner, it augments the V12’s performance, response and delivery without ever making its presence felt. Ferrari has used the electric motor as a means of sharpening the powertrain’s response and providing torque-fill in the lower and mid range of its torque curve, which then allows the petrol engine’s tune to be optimsed for top-end fireworks. The effect is not that of the P1’s fairground ride whumph, instead delivering a solid wall of thrust, with no fuss or sense of multiple power sources. Rewind the years and ironically you’d find LaFerrari playing the part of the McLaren F1, and the McLaren P1 in the more visceral role of the Ferrari F40.

On warm, dry Italian roads it all conspires to create a totally explosive driving experience. The balance of grip and levels of traction are extremely well-judged, so you always seem to know where you are with both ends of the car. The feelsome measured steering gives you something to lean on, so you always have confidence in the front-end, and the stability control system is so precise and dialled-in to LaFerrari’s dynamics that together they only ever flatter your driving, even allowing you to persuade the tail into a smooth slide and then let the rear wheels spin a little before finally applying an invisible guiding hand.

It’s equally impressive on track. I’ve been to Fiorano on numerous occasions, but never has it felt so small. LaFerrari literally devours the place, romping down the straights and chomping through the corners like nothing I’ve ever driven here. Everything is so immediate, intense and explosive, yet just as on the road LaFerrari feels totally intuitive and approachable. The silky steering response that made the road driving so enjoyable also feels perfect on track - quick, but not jumpy - so you can make one clean steering input from turn-in through apex to exit, rather than feel your way in with a series of nudges. And when the tail begins to slide, your corrective inputs are just as natural and measured, to the point where you can forget the value of the car and drive it purely on feel.

We’ve become so used to synaptic gearshifts it’s easy to overlook just how great LaFerrari’s gearbox is. Up and downshifts are so rapid there’s no interruption, yet somehow the way the latency and impulse phases have been finessed means you feel completely engaged with the process of changing gear.

Likewise the brakes are sensational. All the more so when you consider Ferrari has gone one stage further than Porsche by using the brakes for harvesting regenerative energy even during moments of ABS intervention for absolute efficiency. In terms of outright feel and precision the P1 has the edge over LaFerrari, but only in the final stages of braking. And the McLaren has no brake energy recuperation at all.

Quite how LaFerrari manages to deploy its heroic performance with such control, yet make the driving experience so approachable, exploitable and totally engaging is something of a miracle. As is the seamless way in which the powertrain, chassis and aerodynamics have been integrated.

The Ferrari so good they named it twice. The multiple of two covers not only the name but the price. On release in 2013 the hybrid hypercar wore a £1m price tag, since then values have increased two-fold. With only 500 examples produced (plus 210 Aperta models) the invisible forces of supply and demand were destined to drive up values. Had you been selected among Ferrari’s most prestigious clientele, it was very much a case of get one before it’s gone.

Along with the Porsche 918 and McLaren P1, the LaFerrari was one prong of the hypercar trident pushing the envelope early in the decade with the hybrid trio sharing a no compromise philosophy of automotive extremis.

McLaren threw everything it had at the P1, using it as a test bed on which to perfect and trial technology that would underpin and inspire later, larger production volume cars. 375 examples emerged from Woking producing 903bhp and 664lb ft of torque sandwiching it between the Ferrari and Porsche in the power rankings.

Such is the fleeting nature of the hypercar game that the holy trinity’s days at the top are numbered. The Aston Martin Valkyrie looks straight out of Independence Day and is the conceptualisation of Formula 1 aerodynamic ace, Adrian Newey, of Red Bull Racing. The Valkyrie is expected to tip the scales at about 1000kg and boast a power-to- weight figure of 1000bhp/ton. For reference the LaFerrari (only) manages a figure of 757bhp/ton.

The £2.5m Bugatti Chiron is an evolution of the ideals born with the Veyron, but it has come a long way, not least in the power stakes. 1479bhp makes the French hypercar a Porsche 911 Turbo more powerful than the Ferrari (give or take a few horses). The huge reserves are just one indicator of the meticulous engineering approach exuded, combining luxury, performance and genuine engagement.

Then there’s the Formula 1 car for the road. Mercedes-AMG has taken Lewis Hamilton’s Sunday driver and legalised it for the road. The Project One will boast a four-figure power output and will rev out all the way to 11,000rpm.

There’s a 60mm gain in headroom yet a 30mm reduction in roofline height compared with the Ferrari Enzo. This has been achieved by reclining the driving position a little and doing away with a conventional seat frame. Instead the cushions are bonded directly to the tub, with all the adjustment being in the pedals and steering wheel. This has a knock-on effect of enabling engineers to lower LaFerrari’s centre-of-gravity by 35mm; an unprecedented gain over an already extreme starting point and something that allows engineers to run softer springs yet still reduce body roll. According to Ferrari, every 10mm it could drop LaFerrari’s centre of gravity shaves 0.3sec per lap at Fiorano, 0.4sec at Monza and 2.2sec at the Nürburgring Nordschleife. 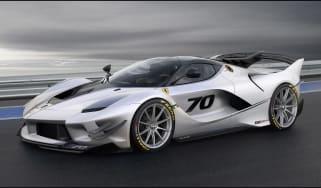 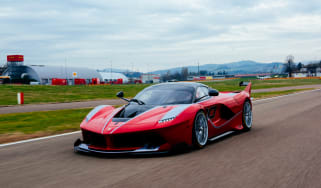 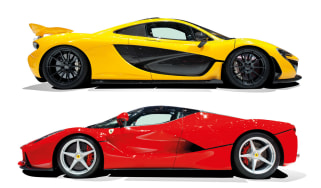 LaFerrari v McLaren P1 - how the hypercars stack up 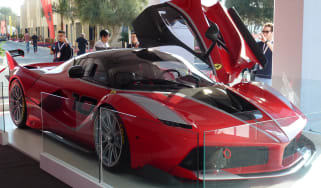 Ferrari has hinted it'll be developing an even faster version of the LaFerrari FXX K, called the Evoluzione
Advertisement
Visit/ferrari/laferrari/14805/ferrari-xx-marc-gen-introduces-the-cars-inside-evo 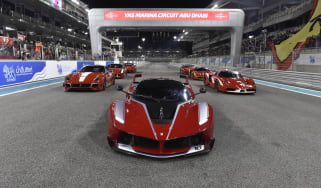 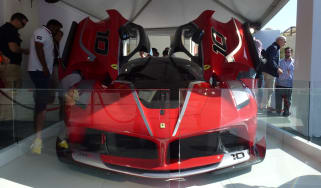 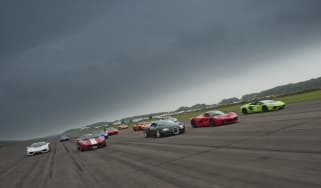 What's it like to hit 207mph in a LaFerrari? And can a Bentley, four-up with the roof down, touch 200mph? Ride onboard...
Skip to HeaderSkip to Content