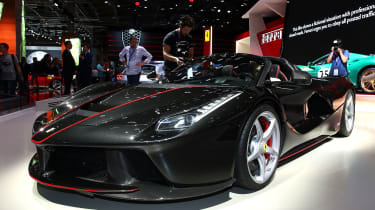 The LaFerrari Aperta has been announced at the 2016 Paris Motor Show. The car, which features either a soft top or optional carbon-fibre hard top, matches the standard LaFerrari almost exactly for performance.

Ferrari claims it has the same torsional rigidty, top speed and thanks to clever aero work, takes no penalty to its drag coefficient despite the open-top.

0-62mph takes less than three seconds and the LaFerrari's sensational V12 hybrid powertrain remains unchanged. That means a 6262cc V12 with its impressive 13.5:1 compression ratio mated to a 120 kW electric motor. Ferrari says it has tweaked the setup based on lessons learned with the standard LaFerrari to help increase its overall efficiency. 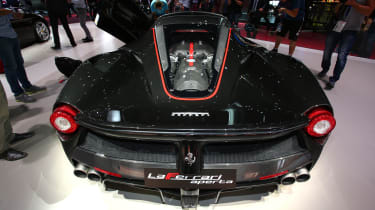 The LaFerrari's inconel equal-lenghty 6 into 1 exhaust system also remains, although Ferrari does say it has be tuned to make it sound even better, a bonus given the fact the car is now open-top.

Styling actually remains relatively unchanged from the standard road car, with its clever carbon-fibre tub meaning strength remained despite making changes for the open-top roof. Ferrari calls its a carbon-fibre 'flying bridge' which incorporates the roof system into the main body of the car. Also included is an aerodynamic wind stop aimed at reducing wind noise. 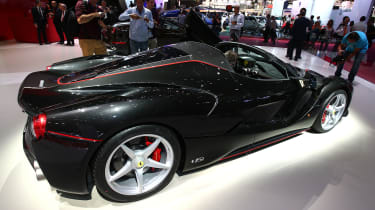 The chassis did have to be reinforced in its lower section, while the butterfly doors found in the LaFerrari now open at a slightly different angle due to safety necessities. Those doors also feature a carbon-fibre insert so they can rotate, which helps differentiate the Aperta from the standard car.

The modifications and changes do give the Aperta a weight penalty over the normal car, although exactly how much hasn't been confirmed.

We will have more details on the LaFerrari Spider as and when they're announced.