Bugatti Chiron review - the £2.5m hypercar we've been waiting for

Chiron sets a new benchmark for performance, capability and technology. Crucially it now adds driving enjoyment and engagement to the mix 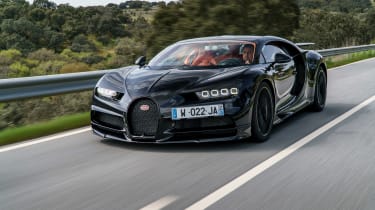 What can you use as a comparison when talking about the Bugatti Chiron? This is a car that develops 1479bhp and 1180lb ft of torque. It will accelerate from a standstill to 124mph in less time than a Focus ST can hit 62mph, and its top speed is (limited to!) 261mph.

The obvious answer would be Bugatti's previous effort, the Veyron. But even that monster pales in comparison with the Chiron. More power, more torque and more speed are of course expected, but Bugatti also promises improvements in other areas - namely, a much improved sense of connection and enjoyment. The Veyron was lacking in this department, so the promise of genuine tactility from the Chiron is an intruiging one - especially when combined with the greater refinement Bugatti claims. In short, it promises to rewrite the rules of the hyper-hypercar.

> Bugatti Veyron: review, history and specs of an icon

Don’t be fooled into thinking the Chiron is propelled by a Veyron engine with the wick turned-up a bit. Yes, it’s an 8.0-litre W16 force-fed by a quartet of turbos, but most of the internals are all-new. To produce the power increase the turbos are much bigger than those fitted to the Veyron. Ordinarily this would mean increased turbo lag, but Bugatti engineers have mitigated this by blowing all the exhaust gasses through two of the turbos below 3800rpm, then feeding all four beyond that point. The crankshaft is stronger, but no heavier. The conrods are stronger and lighter. Everything has been subjected to painstaking scrutiny in order to strike a more efficient balance between strength and weight.

You could say that the new #Bugatti #Chiron is quite fast... http://www.evo.co.uk/bugatti/chiron/19111/bugatti-chiron-review-the-25m-hypercar-weve-been-waiting-for

The resulting figures are 1479bhp at 6700rpm and 1180lb ft of torque between 2000 and 6000rpm, considerable increases on even the range-topping Veyron Super Sport. As you might imagine, the consequences of these numbers are rather impressive performance figures; 0-62mph arrives in less than 2.5sec, 124mph comes in 6.5, 186mph in 13.6sec and rumours are that it'll do the 0-248mph sprint in around 30sec. The recent Chiron Super Sport 300+ took things further still, breaking the 300mph barrier primarily through the use of new bodywork designed for outright speed.

Entire books could be written on the technology contained within the Chiron. The bodywork is super-thin, super-strong carbon fibre with the finest sliver of aluminium honeycomb sandwiched at its core. Likewise the carbon chassis uses the same technology to save weight and add strength. Torsional rigidity is 50,000Nm per degree, flexural rigidity approximately 0.25mm per tonne. That’s comparable to a current LMP1 car.

The Chiron features a fully adaptive chassis that optimises damping, ride height, aerodynamics, steering and powertrain to deliver the right blend of compliance, stability, agility and responsiveness across its unprecedented performance envelope. 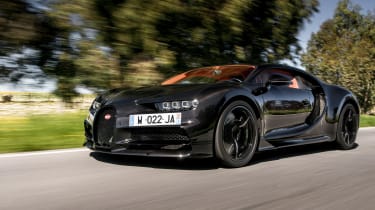 Michelin has developed new tyres to cope with the demands of running at more than 260mph. An aerospace rig was used to simulate the stresses. The carbon ceramic brakes are 20mm larger (now 420mm front and 400mm rear) and 2mm thicker. These are gripped by all-new forged aluminium calipers - eight-piston at the front, six-piston at the rear - and built to an asymmetrical design to help dissipate the incredible amount of energy generated when slowing the 2-ton Chiron from high speeds. A new design of heat shield guides air through the discs to further aid cooling.

Down to the nitty gritty, then. With the Veyron it was almost as though Bugatti skipped this all-important aspect, such was the focus on hitting those once-incredible power and performance benchmarks, and making sure it was reliable and drivable.

This time around Bugatti knew the Chiron had to back-up the numbers with more feeling and emotion. Pretty much straight away you sense the connection and detail through the steering. Of course there’s tons of grip and unshakable traction - anything less would be extremely negligent given the power and torque on-tap - but it’s the fact you now know how much you’re using and how much is left that marks the Chiron out as something special. 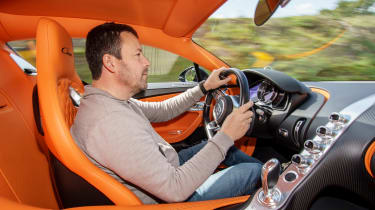 Its weight and that endless plateau of torque mean its not a flighty, fighty machine in the style of a P1 or LaFerrari, but it manages to feel both planted and calmly agile. The steering is extremely well-judged in terms of response, so you’re soon guiding the Chiron instinctively. Accurately, too, which is always a confidence booster. It feels a size smaller than it is.

The problem, if you can call it such, is the range and accessibility of the performance. A squeeze of the throttle sends you surging down the road with the insistence of an avalanche. Give it a proper push to the carpet and there’s the briefest sense of the W16 filling its lungs and then you simply punch from where you were to where you were looking, waaaaay down the straight. It’s more like matter transfer than conventional acceleration. Unfortunately it seems to leave your stomach and your senses somewhere in its wake, at least until your brain begins to recalibrate. Nothing in my experience connects the corners quite like this.

Thankfully the brakes are more than up to the task to stopping the thing. Those super-trick cooling fins without the disc shrouding work a treat, which combined with the airbrake mean you’re in seatbelt freefall when you brake from big speeds. All this stopping power comes with plenty of feel and finesse at lower speeds. Likewise the DSG transmission is super-smooth and virtually instantaneous. When left to shift by itself you’re always in the meat of the torque - hard not to be, truth be told - but it’s also satisfying to flip the paddles yourself. 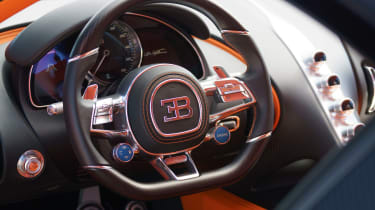 There are four dynamic modes, plus the VMAX mode, which is accessed by a secondary key mounted on the driver’s side door sill. This preps the car for a full 261mph charge, though it defaults back to 236mph if you apply more than a few degrees of steering lock.

If you have to ask and all that. Still, seeing as you have, a Chiron will set you back £2.1m plus taxes. Of the 500 scheduled to be built, half have already got substantial deposits against them. And all from customers who have yet to drive the car. Around half of those are existing Veyron owners, the rest conquest customers. Amazingly, some have placed deposits on two cars: the first to be delivered as early as possible; the second later in the build phase to allow more time for greater personalisation. Now that’s a classy solution to a decidedly First World problem. 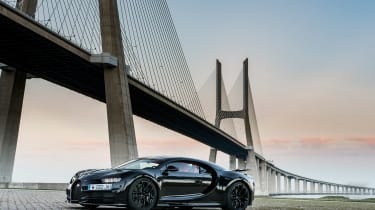 Rivals? In all honesty there aren’t any. Texan tuning legend John Hennessey is busy developing his Venom F5 - a 290mph successor to the original Venom, which I drove and loved back in 2013. Knowing Hennessey he would be the first to say his cars are entirely different animals.

Quite simply nothing combines the Chiron’s civility and savagery. Nor its engineering integrity and impeccable quality. Its capabilities are mind-blowing, its potency almost unimaginable. And yes, its performance - though ridiculously accessible - is all-but unusable unless you’re on a de-restricted autobahn. Something tells me this doesn’t matter a jot to those who will own one. Nor should it to you or I. So let’s just celebrate it for what it is: the most extraordinary supercar the world has ever seen. 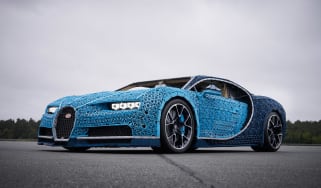 If your 3699-piece scale model was not tricky enough to complete, what about a full-sized version?
Visit/bugatti/chiron/21542/bugatti-chiron-sky-view-set-for-monterey-debut 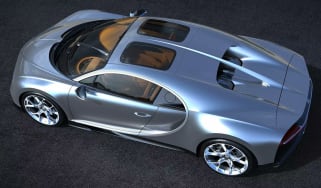 Fancy a little more light in your Chiron's cabin? This is Bugatti's solution
Visit/bugatti/chiron/21320/lego-technic-bugatti-chiron-threatens-to-devour-hours-of-free-time 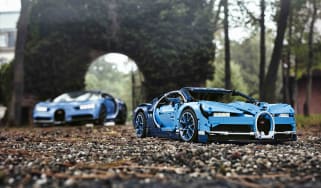 One of the world’s most complex cars is now a complex Lego Technic set, with over 3600 pieces
Visit/bugatti/chiron/21275/the-chiron-that-evo-built-how-you-buy-a-25m-bugatti-chiron 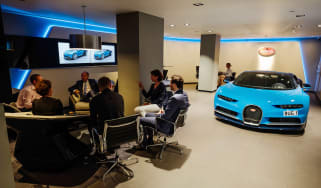 The Chiron that evo built - how you buy a £2.5m Bugatti Chiron

How does one go about buying a £2.5m hypercar? We visited Bugatti's London showroom to find out
Visit/bugatti/chiron/20897/new-bugatti-chiron-sport-revealed-in-geneva-lighter-firmer-faster 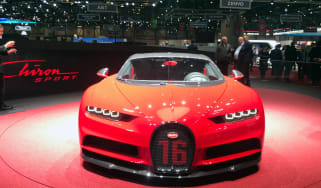 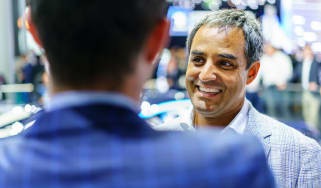 Montoya talks to us about F1, NASCAR and launching the Bugatti Chiron
Visit/bugatti/chiron/20283/first-used-bugatti-chiron-aims-for-1m-profit 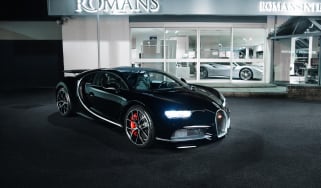 With a value of £3.6m a Bugatti Chiron has hit the classifieds for the first time in the UK.
Visit/bugatti/chiron/20208/new-model-bugatti-chiron-w16-engine-yours-for-just-7320 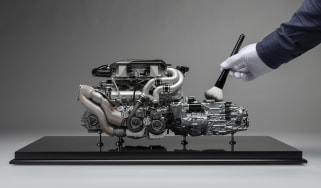 The 1:4 scale Bugatti Chiron engine is unfortunately non-functioning but you wouldn’t know it just by looking at it
Visit/bugatti/chiron/19885/the-bugatti-chiron-finally-lands-in-the-usa 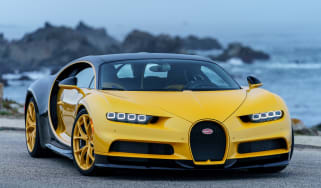 The Bugatti Chiron finally lands in the USA

The Pebble Beach Concours d’Elegance will provide the platform for the first US based handover of the new Bugatti Chiron.
Visit/bugatti/chiron/17425/bugatti-chiron-at-geneva-images-details 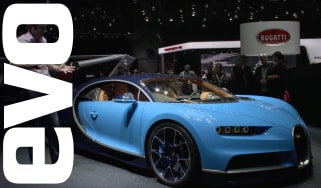 Bugatti Chiron - everything you need to know about 261mph hypercar

Production of the Bugatti Chiron has begun at the Molsheim 'Atelier'. Here is everything we know about the 1500bhp hypercar.
Visit/bugatti/chiron/18044/heres-what-its-like-inside-the-uks-first-bugatti-chiron-showroom 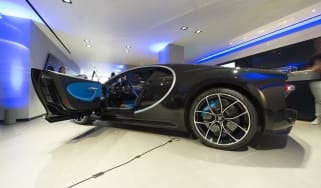 Here's what it's like inside the UK's first Bugatti Chiron showroom 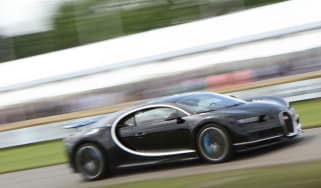 Bugatti Chiron first ride - what's it like to be a passenger in the world's fastest car?