If your 3699-piece scale model was not tricky enough to complete, what about a full-sized version? 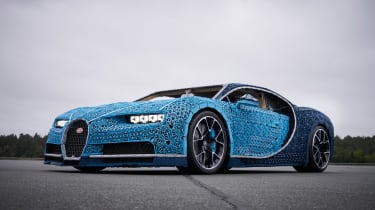 Not content with taking up multiple weekends of its young and young-at-heart fans, Lego has outdone its own record-breaking scale model Bugatti Chiron set with an actual life-size version, and its fully functional, too.

Well not quite fully functional, as the Lego model’s 12mph top speed is a little down on the production car’s 261mph, but it’s still mightily impressive considering it uses few bespoke parts and no adhesives or glue to keep it all in one piece. That towering top speed was tested at Volkswagen’s Ehra-Lessien testing facility with legendary racing and test driver Andy Wallace at the wheel.

And it’s not just the body that’s constructed out of Lego, as it’s also powered by Lego, using 2304 Lego Power Function motors, 4032 Lego Technic gear wheels and 2016 Lego Technic cross axles. All together, these motors produce a theoretical 5.3hp and 67lb ft of torque, which is actually the same torque figure produced by an entry-level Volkswagen Polo, making this model either a really impressive technical exercise, or the Polo woefully underpowered (we’re thinking it’ll be the latter). 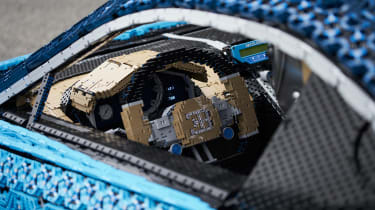 The model is constructed with over one million individual pieces, and it is the first time that Lego Technic has built a large-scale moving model using only Lego bricks and other Technic components. It’s also the largest model made without the help of any adhesives or glue. Taking a total of 13,438 man hours to complete, the build took nearly 27 times longer than it takes to build an actual Chiron.

Of course, if you’re going to go to the effort of building a model this elaborate, you may as well make it light up, so Lego had to develop a new type of translucent brick to use in the lighting elements at the front and rear.