Montoya talks to us about F1, NASCAR and launching the Bugatti Chiron 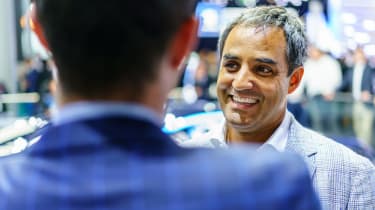 Interviews with racing drivers are, if we’re honest, rarely all that interesting. They always think they’ve ‘got good pace’, that the ‘team is really strong’, that they’re ‘in a great place for next season’ and that they’ve ‘got a great car under them.’

If you played a post-race press conference as a drinking game and took a sip of your drink every time you heard one of those phrases, you’d be tipsy in just a few minutes. If you included ‘for sure’ in that, you’d be absolutely smashed.

But, I knew Juan Pablo Montoya would be different when the first sentence he said to me was a piss-take about my accent sprinkled with swear words, ‘You’re from England… no f*****g s**t.’

It’s the sort of response you might potentially, get from a retired racing driver, if you were lucky and they were in a particularly good mood. Montoya is not retired though, he may have left F1 over 11 years ago, but he’s still a professional driver having raced in the IndyCar series this year and will be campaigning an Acura in the IMSA Daytona Prototype international class next year.

‘It’s funny, I saw Ralf Schumacher here around the kart tracks because he’s got a karting team and my son’s racing karts here in Europe. We were talking and he says “What are you doing?” I say “I’m still racing’” and he looks at me like I was crazy. And it’s true. I just love it. I love it. I’m a car guy. I’ve got the bug for cars. I always have.’ 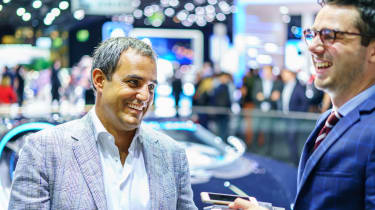 It’s clear he’s been having lots of fun racing in America, but I wonder whether F1 was at all comparable, was it as fun? ‘At the beginning it was. Because I dreamt all my life of making Formula One and winning races. You know, I won Monaco. I was a huge Senna fan, and to win Monaco when you’re a Senna fan it’s… I was over the moon.’

‘I had shots at the championship, too. But then I realised, to win the championship, it’s all about just timing. Being in the right team at the right time. That’s the only opportunity you have to win a championship. And I wasn’t enjoying myself, so, you know, something else came up and I went to America. I did seven years of NASCAR. There was some fun years, there was some miserable years. But it’s racing, that’s normal. IndyCar has been fun and now I’ve just moved to DPis and I think that’s going to be a really cool project too.’

I wonder if there was a culture shock when going from high-tech Formula One to the, sort of, low-tech world NASCAR was it liberating? ‘Sort of? There’s no “sort of” there.’ Fair point. ‘I don’t know. It was more about enjoying the racing for me.’ But it’s clear that cutting-edge technology gave him one of his favourite race cars: ‘The 2003 and 2004 Williams, how that car drove… nothing drives like that. I’ve never driven anything, no where near, how that car drove.’

I remind him, not the he needs to be reminded, that he still holds many outright lap records in that car. ‘Exactly. That car was just unreal. It was absolutely amazing to drive. You’re not going to find anything that drives like that, but at the same time, if you’re not enjoying it what are you doing?’ 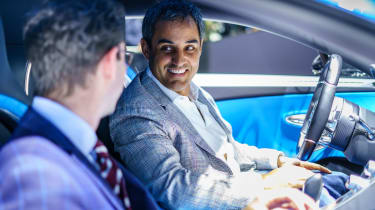 Montoya’s quest for fun isn’t just limited to racing, and he’s been having fun in a road car. Not just any road car, though, a Bugatti Chiron. He set a world record in the hypercar, reaching 249mph (400kph) from a standstill and then braking back down to zero in just 32.6 seconds and 1.43 miles. The actual record seems inconsequential to him, though, he’s obsessed with the way it accelerates. ‘It’s crazy because when it goes, I get the giggles. Oh my god! And it’s unbelievable. I thought it was just me, and I was watching some videos of some reporters when they went to Portugal, and they were doing the same thing. Everytime they got out, they were laughing. You don’t believe how quick it is.’

And this is from a man who has experienced similar acceleration forces in an F1 car. ‘When we had full traction control and full launches [in Formula 1] I think we could get a little quicker. 2.4 to 2.5 second starts in Formula 1, that was a really good start. And we had nine hundred horse power, you know, in a six hundred kilo car.

‘The problem is, in a Formula 1 car, you’re not even thinking about that. You’re just going at it, you’re racing. But the crazy thing with this is you can be listening to music in jeans and a t-shirt, and stop at stop light and do a launch, a two and a half second launch.’

It’s not quite as simple as that, apparently. There is a technique to getting the best start from the Chiron. ‘Actually when you launch you don’t want to sit on the launch too much because that builds too much boost. And if you build too much boost you’ll spin the tyres. So you want to kind of go. Vrrrrr’ He uses his index finger to emulate a rev counter needle shooting to its redline. ‘And let go to get better traction, to get a better launch. It can feel stronger if you do it with more power, but it goes whuudtt and the traction control kicks in.’ 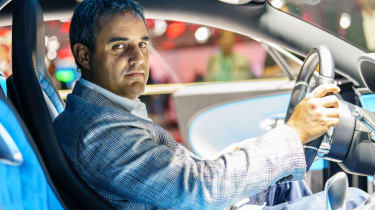 He’s clearly amazed by the Chiron. ‘If you hear the effort they had to go to to get to 430kph with the Veyron. Like they were coming out of the banking [at Ehra-Lessien at] over 200kph to go that fast. I could be standing still [in the Chiron], and when they go by, I think, I can start from zero and pass them.

‘I haven't driven the Veyron. But I know people who have driven both. They say the Veyron is disappointing compared to this. It’s crazy because the Veyron was, I mean, it was a thousand horsepower. I mean, that’s a friggin’ supercar.’

I ask him if he’s got his name down for a Chiron. ‘Oh I wish. I told them that if I could, I’d end up in jail somewhere, I don’t know where, wherever they deliver the car. That country, I’ll be in jail.’