The BMW i8 is a new age sports car, but it proves that the basic tenets of involving handling, strong straight-line performance and eye-catching styling will always be central to the sports car proposition.

With its clever hybrid drivetrain, the i8 is very nearly as accelerative as a Porsche 911 Carrera, but it can also cover close to 20 miles in electric only mode, which makes it a unique offering at this price point. The drivetrain is certainly an impressive technological achievement and an object lesson in systems integration, but it lacks the emotional appeal of a soulful, high-revving engine and that will count against it among certain traditional sports car buyers.

Aside from slightly remote steering and a lack of outright grip across the front axle in hard cornering – a result of its narrow tyres – the i8 is genuinely fun to drive. It has superb body control and excellent balance.

The i8 turns heads like few others £100,000 sports cars, perhaps because it is the car of the moment. The cabin architecture is very seductive, but it’s something of a shame that all of the minor controls and the infotainment interface are lifted directly from the rest of the BMW range. 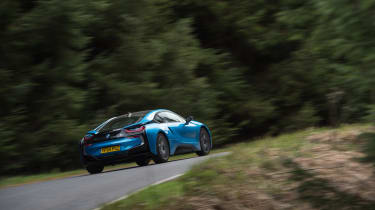 Unlike many models in the £100,000 price range, the i8 sports gets almost all of the kit you’d ever need as standard. Models such as the Porsche 911 may require you to add thousands onto the base price to get what you desire, but specifying the Bavarian hybrid shouldn’t drive the price too far north of the £106,000 entry point.

Earlier last year at the Frankfurt Motor Show, BMW revealed an open top roadster variant of the i8. The removal of its roof comes with the addition of cost however, with the roadster starting at almost £125,000.

There isn’t an awful lot of customisation permitted when configuring the i8, with just five two tone finishes available, each hue contrasting with either Frozen Grey or BMW i Blue accents. Sophisto Grey is a no cost addition, while Iconic Silver coming in at £450 and Crystal White with blue/white accents the most expensive, at £1350. Other than the standard five spoke wheels, you can choose from two other 20 inch options at £1500.

Ducking under the scissor doors presents an interior befitting the futuristic exterior.  There are three interior ‘worlds’, each upholstering the cabin with different materials. At £895 the Harman Kardon stereo upgrade would be beneficial to those who’ll be travelling under the sole, serene steam of the electric motor more often than not. 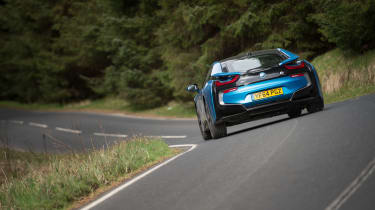 Other than that, the options list is mostly confined to small interior styling tweaks or minor upgrades to the infotainment system - there really is just about everything you could realistically want. The extensive suit of technological functions and amenities includes heated seats, climate control, a heads up display, keyless entry with BMW's smart key, and the iDrive infotainment integrating the navigation system.

Most of the above is controlled via iDrive, one of our favourite infotainment systems and offers all the features you could want, accessed via the BMW’s high resolution screens in the binnacle and atop the dash. The options list does offer extras such as web browsing, which are reasonably priced but largely useless.

Slotting the BMW i8 into a performance car segment is difficult, hence defining its rivals is too. The closest rival we can think of to the i8 is a well lavished Porsche 911 Carrera 4 GTS. Also just eclipsing six figures and offering 430bhp from a naturally aspirated flat six, it’s a very exciting thing. Dynamically, it may also be better, but no amount of bright Guards Red paint turns heads like an i8.

A fellow hybrid supercar, and  technological tour de force, the all-wheel drive NSX carries a £30k premium and  flaunts the same supercar panache as the i8, although it’s performance perhaps elevates the Honda out of the i8’s territory. Tesla’s P100D, which undercuts the Japanese supercar by a few thousand pounds offers stratospheric straight line performance purely under electric power - oddly addictive, it’s a wholly different proposition but one that shouldn’t be discounted.

Watch an i8 square up to a 911 Carrera GTS here

Alternatively, you have the Tesla Model S P90D. This is a very different car to the i8; larger, heavier and altogether more ‘executive’. In pure acceleration terms it's mighty, but falls short of the BMW when it comes to driver involvement.

More on i8 coupe 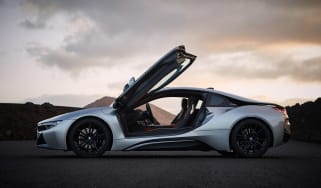 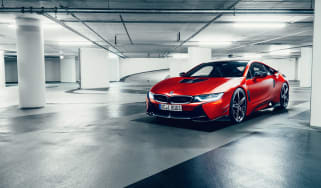 The AC Schnitzer i8 completed the famous benchmark circuit clocking a lap time of 8:19.80 min
Visit/bmw/i8/19699/ac-schnitzer-acs8-review-do-carbon-upgrades-and-new-shoes-improve-the-bmw-i8 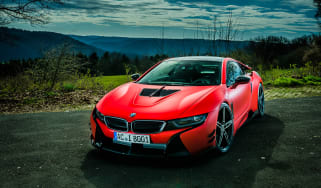 Wheel, tyre and suspension upgrades enhance the i8, but you'll pay for the privilege
Visit/bmw/i8/17987/bmw-i8-formula-e-safety-car-the-hybrid-coupe-benchmarked-on-an-m4-gts 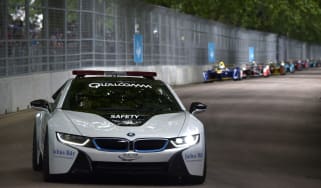 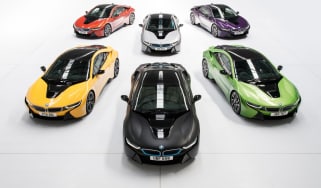 BMW i8 paint options just got a lot more exciting 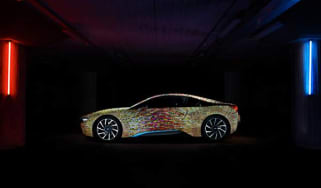 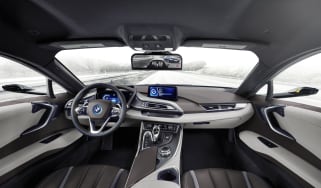 BMW wants to get rid of wing mirrors - here's how 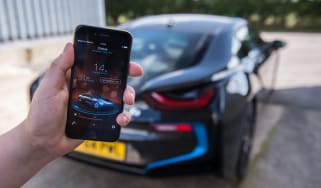 BMW i8 and Apple Watch connectivity review. How does it work? 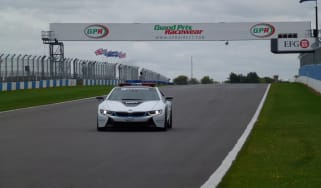 'Game changing' Qualcomm wireless charging could feature on BMWs by 2017 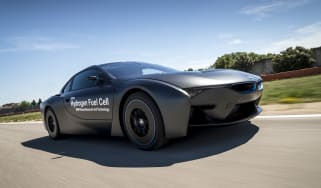 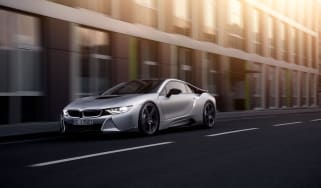 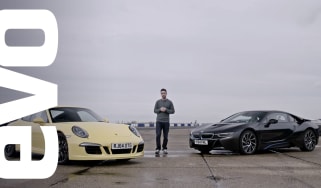 An icon squares up to the new order, but which one will win?
Advertisement
Visit/bmw/i8/14891/bmws-touchscreen-key-fob-set-to-go-on-sale-with-i8-this-autumn 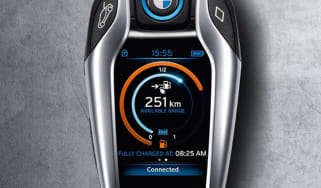 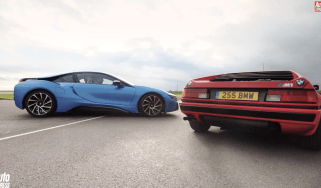 BMW i8 and BMW M1 compared on track

Some say the BMW i8 features inspiration from the BMW M1. Here the two are tested on track...
Visit/bmw/i8/14571/manhart-racing-bmw-i8 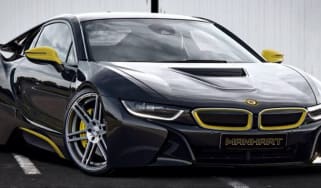 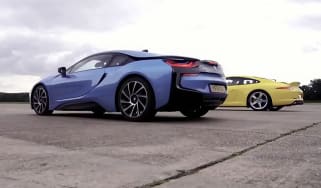 The hybrid tech-fest that is the BMW i8, faces off against the more conventional Porsche 911 Carrera 2S Powerkit
Advertisement
Skip to HeaderSkip to Content