An icon squares up to the new order, but which one will win?

For a long time Porsche hasn't had much to worry about in its segment of the sports car market. The 911 remains one of the most iconic cars ever made and continues to excite and thrill drivers with every iteration.

But then the BMW i8 came along and tried to do things differently. A hybrid powertrain was combined with cutting edge design, to deliver a truly modern mid-engined sports car. Crucially though, BMW promised it would be fun to drive too.

As such, for the next in our Deadly Rivals series, we thought it only fair we compare the two. We've got a Porsche 911 Carrera 4 GTS up against a BMW i8. Both four wheel drive, both around £100,000 and both hugely exciting in very different ways.

Somewhat predictably, the 911 takes the win here. But don't let that put you off the i8, which proved to be a far more exciting ownership proposition after we'd given it some time on the track.

The seed has been sown for the future and while the 911 continues to work its magic, an M-division i8 could mean a major threat to the Porsche crown. 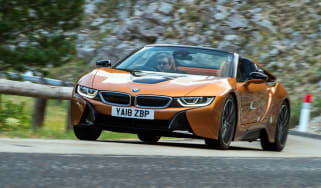