Wheel, tyre and suspension upgrades enhance the i8, but you'll pay for the privilege 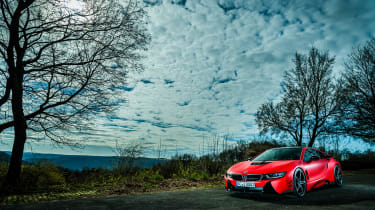 Own a BMW i8 but want yours to stand out from the crowd? Own an i8 and want it to be dynamically a bit sharper? If you’re in either (or both) camps then perhaps AC Schnitzer can assist with its carbon-clad ACS8.

No power upgrade as yet, although Schnitzer is exploring this option, but given the way the three-cylinder engine and the electric motors are so seamlessly integrated it’s proving remarkably tricky. Thus we have the standard 357bhp and 420lb ft (combined output) leading to a 4.4sec 0-62mph time which is quick without being stellar these days.

Carbon adorns almost every available surface – three-piece front spoiler, front corner canards, bonnet vent, mirror caps, sills, a three-part rear diffuser and door handle panels – and there’s no missing that carbon rear wing sitting on the rear deck either. There are even carbon air vents that have been added behind the front wheels and on top of the rear wings and while the former have a nigh-on factory appearance we’re less convinced by the latter. 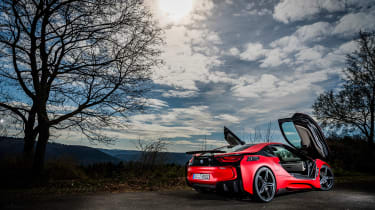 Overall Schnitzer’s additions do compliment the car’s appearance although the rear spoiler is a little incongruous given the rest of the carbon is integrated with the car’s flamboyant shape. The choice is up to you though – if you don’t like it leave it off.

While all the carbon is purely cosmetic there are other modifications that should have an impact on the way the car drives. What we do have here though are suspension and wheel and tyre changes that could potentially impact on the way the i8 drives. The Schnitzer spring kit lowers the car by 25mm and 20mm (front and rear respectively) endowing the i8 with a lower centre of gravity while Schnitzer has also fitted a set of its AC1 forged alloy wheels.

These are lighter than the originals (saving 4.4kg overall) despite being an inch wider and an inch larger in diameter than the optional BMW ‘Turbine’ style wheels to which Schnitzer compared them. There’s grippier rubber on offer too and the 245/35 and 285/30 Michelin Pilot Supersports are appreciably wider than both the standard i8 rubber (195/50 and 215/45) and the optional 215/45 and 245/40s. 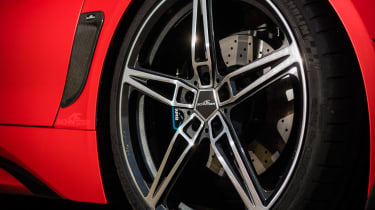 By the time the larger tyres have been fitted the weight of the Schnitzer wheel and tyre combination is the same as the standard car, but to get that much extra rubber on the road without a weight penalty is a good effort.

Seemingly small changes perhaps but do Schnitzer’s upgrades fundamentally alter the car? In cruise mode you’d be hard pressed to tell it’s sitting on different springs or that the wheels are an inch bigger as the ride is still pliant and composed, but let the i8 off the leash and throw some decent corners into the mix and the ACS8 feels more alive than the standard i8.

The extra rubber on the front axle adds a little weight to the steering and as you start pushing harder there’s significant additional bite from the front wheels with much less of a tendency for the front end to wash wide and understeer. With appreciably more grip from the rear end and still with the standard car’s three-cylinder driving those wheels it’s very hard to unstick it but as it struggles less for traction the ACS8 can still slingshot you out of corners in an immensely satisfying fashion. 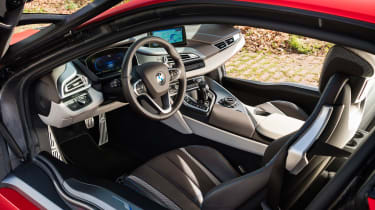 The lowered ride height plays its part and the Schnitzer springs endow the car with a pretty flat cornering attitude without upsetting the original’s ride or balance. As a way of increasing your i8’s cornering performance without giving it any more horsepower it’s very effective.

The upgrades don’t come cheap though and if you wanted your i8 to look like this one AC Schnitzer UK will carry out a complete conversion for £34,995, and that doesn’t include the wrap. Priced individually the majority of the larger carbon parts cost over £3000 (each) and even if you just want the springs plus the wheel and tyre set up you’ll be spending nigh-on £10,000. Expensive perhaps, especially when added to an i8’s £106k on-the-road price, but with used i8s starting at about £60,000 we could be tempted…