BMW 3-series review – does it still reward the keen driver?

It’s hard to believe the 3-series is about to celebrate its 45th birthday but the recipe that made it such as success for BMW back in 1975 when the first generation was launched still stands today. Entertaining manners, strong engines, good build quality and a premium image that shows no sign of being significantly diluted even when the 3-series is now such as ubiquitous part of the motoring landscape.

Now in its seventh incarnation the 3-series is up against tougher opposition than ever. Arch rivals in the form of the Mercedes C-Class and the Audi A4 keep raising the bar and while the previous generation 3-series was a decent premium exec it had begun to slip behind its rivals in certain areas. Its interior was lagging behind while big steps in refinement from the opposition saw BMW having to play catch up.

> Mercedes-Benz C-class review - Can it take on the mighty 3-series?

The biggest question mark though, was whether BMW would be able to manage this without losing its sporting slant that’s characterised the 3-series for the past 45 years. In the most part it’s succeeded. Thanks to a stiffer body (by up to 50 per cent in some areas), new damper technology and enhanced soundproofing measures the additional refinement box has been ticked. A thoroughly revised interior packed full of tech from the 5-series ensures the 3-series no longer looks like second best inside when compared to its German rivals. 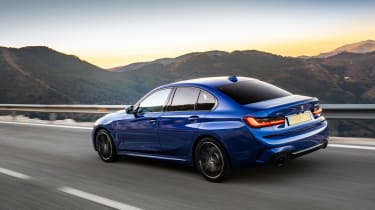 The engine line up has been slightly slimmed down from the previous generation but there’s still a range of 2-litre diesels and petrols, a 3-litre diesel and a soon to arrive M Performance model, the M340i xDrive, along with the de rigueur plug-in hybrid, the 330e. Even the slowest diesel will crack 0-62mph in less than eight and a half seconds while the quickest diesel, the 330d xDrive manages the same task in 5.1sec.

While the 330d’s engine is exceptional both in terms of output and refinement (it even sounds good) the two other diesels also deliver the goods but without being particularly stimulating. Enhanced soundproofing over the older 3-series means they’re more or less inaudible unless extended. A 0-62mph time for the 320d of around seven seconds (depending on gearbox, and or whether xDrive has been specified) is plenty quick enough, too.

The three petrol models (320i, 330i and M340i xDrive) should, in theory, be more likely to stir the soul. The 320i and 330i share the same 2-litre turbocharged ’four and while they’re quick enough (the 330i dips under the six-second barrier for the 0-62mph sprint) they’re not hugely engaging units, with a somewhat flat and uninspiring soundtrack. The M340i is the only petrol six-cylinder and a brief drive in a pre-production model suggests it’s hugely potent – nigh-on M3 levels of performance – while sounding the part, too.

While perhaps the 3-series’ engine line up isn’t as inspiring as it used to be the good news is that its chassis can still entertain, exhibiting the sort of confidence-inspiring balance that’s missing for many rivals. It’s a little dependent on specification though – SE and Sport models are entertaining if a little ragged at the limit while M Sport versions are considerably stiffer and corner more enthusiastically. The best compromise is to be found by opting for the M Sport Plus package which adds adaptive dampers. 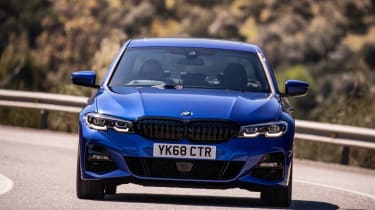 You do get a fair bit more kit for your money though, with Sport models gaining leather upholstery, heated sport seats 18-inch alloys, and oddly, a larger fuel tank. Opting for the M Sport brings the usual BMW set of upgrades, an M aero kit and different alloys, M Sport suspension and BMW’s new Live Cockpit Professional with its fancy new digital instrumentation. 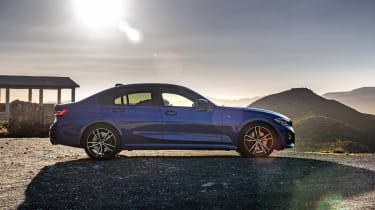 For most buyers the choice of junior exec will be between the 3-series and its two closest rivals, the Audi A4 and the Mercedes-Benz C-class. In their latest incarnations both are worthy rivals that offer similar pricing and performance but the 3-series has caught up where it was lacking before, mainly in terms of refinement and interior design and technology. While the 3-series’ driving experience may have been slightly diluted it’s still a better steer than these rivals.

But while the 3-series might have retained its crown as the best German compact exec to drive it’s worth considering what the Italians have to offer, specifically the Alfa Romeo Giulia. The Giulia Veloce squares up pretty closely to the 330i and while it doesn’t offer the full Quadrifoglio experience it is a pretty brisk performer and with sharp, direct steering and a sweet chassis it does offer an excellent drive.

All the ingredients are present to make this a cracking sub-M Sport saloon, but the M340i puts outright pace and tech above real driver thrills and en…
BMW 320d M Sport review - can the everyman 3-series beat the Audi A4 and Mercedes C-class?

BMW 320d M Sport review - can the everyman 3-series beat the Audi A4 and Mercedes C-class?

New BMW 3-series has more of everything, but gives away a little of its satisfying precision in the process
New BMW 330i Sport review – all-new 3-series to take on Mercedes C Class 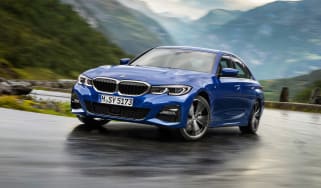 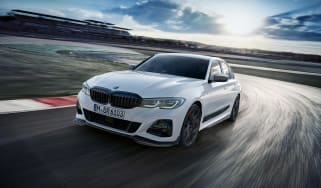 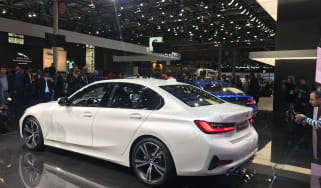 Seventh gen 3-series is most advanced yet to take on Audi A4 and Mercedes C-class. New M3 set for 2020
BMW 3-series review - Still the best compact executive car? 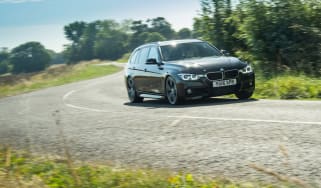 The latest generation of 3-series is the most comfortable yet, but some of its sporting character has been lost
New BMW 3-Series – full details on the sports saloon to beat 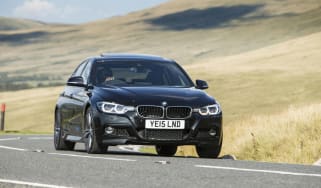 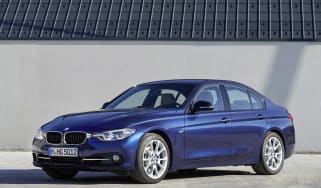 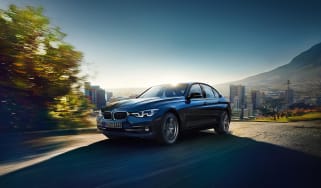 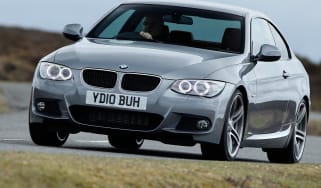 The twin turbo 335i has been updated, and lost a turbo. Does this signal the coupe's downfall?
BMW 335i Luxury review - price, specs and 0-60 time 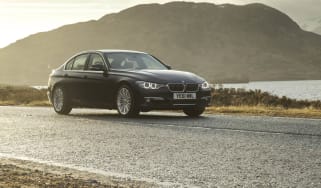 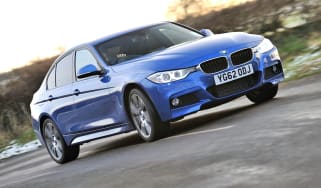 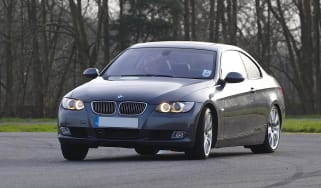 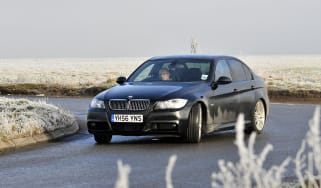 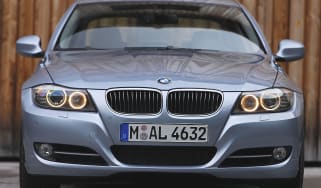 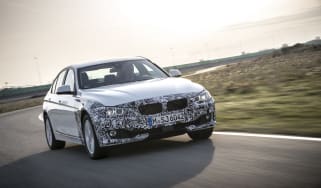 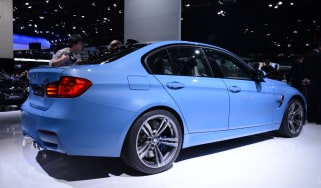 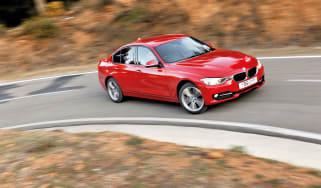 The BMW 3-series is one of the most capable compact saloons you can buy. We put the 320d to the ultimate test in this European challenge.
2013 Alpina B3 Biturbo news and pictures 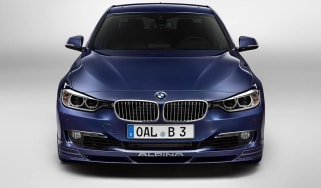 2013 Alpina B3 Biturbo news and pictures 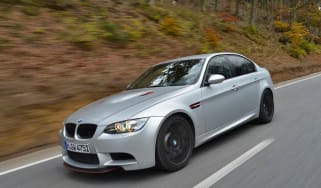 The CRT is a special edition BMW M3 saloon, with the 444bhp V8 from the M3 GTS and new carbon technology
BMW announces M Performance upgrades 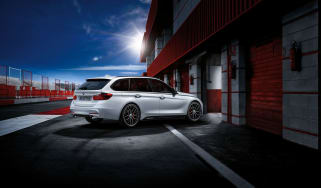 BMW will reveal full details of its new 3-Series Touring M Performance upgrade package, as well as the rest of the M Performance range, at the Essen m…
BMW to launch new M-sport range 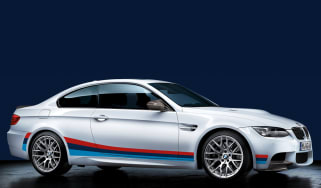 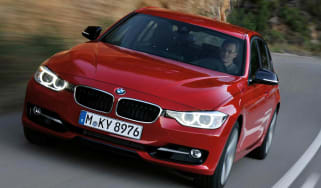