All the ingredients are present to make this a cracking sub-M Sport saloon, but the M340i puts outright pace and tech above real driver thrills and enjoyment 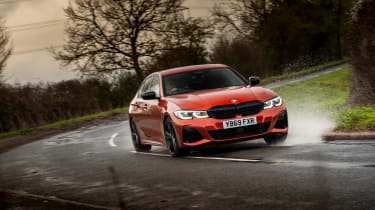 Small six-cylinder BMWs were once something to get excited about, even if they didn’t wear an ‘M’ badge. Can the latest G20 model continue that tradition in top-spec M340i xDrive guise, or does the combination of turbocharging, four-wheel drive and a standard automatic gearbox, not to mention a host of other modern tech, dim that once vibrant driver appeal?

This latest evolution of the ‘TwinPower’ single turbo (it stands for Twin Scroll Turbo) B58 ‘modular’ straight-six produces precisely the same power as it does torque at 369bhp and 369lb ft, up from 320bhp in the old F30 340i.

Given that peak torque stretches from 1850rpm to 5000rpm, it should make short work of the 1670kg kerb weight, and indeed, the figures suggest exactly that, 62mph arriving from a standing start in just 4.4sec. The days when a non-M car BMW such as the M340i could be had with a manual transmission are long gone, and the only choice here is an eight-speed torque-converter auto, offering manual changes via paddles behind the steering wheel. 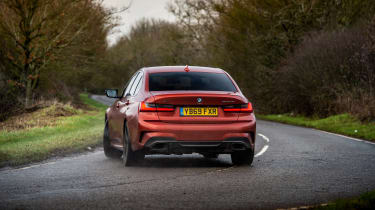 The B58 engine features a raft of technical changes in this latest guise. The turbocharger itself has 25 per cent less inertia for better response, while the pressure of the fuel injectors has risen to 350bar. The new M Sport exhaust system increases the sound, but is also fitted with two petrol particulate filters to enable compliance with the latest Euro 6 emissions standard.

BMW’s ‘junior’ sporting models have become increasingly bespoke over recent years, and the braking system on the M340i is a good example. The blue-painted calipers signify 348mm/345mm discs, front/rear, with four-pot calipers on the front axle and a bespoke hydraulic configuration to improve both power and feel. 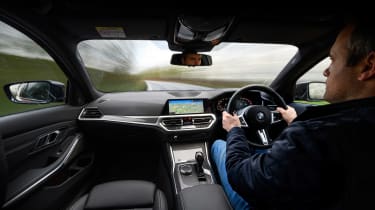 To say the M340i’s performance is strong is a massive understatement. The boost arrives early and forcefully, and from that point onwards the 340i simply charges forward, sustaining that delivery to the red line. Short intermediate gears and quick shifts from the auto ’box exaggerate the sensation. Want some perspective? It’s 0-60mph time is just a fraction behind that of a Porsche 996 Turbo – and all from a ‘regular’ 3-series.

Strangely, there’s limited joy to be had from the process. To define exactly why isn’t the easiest of tasks, but given the excellent refinement of the G20, and the lack of driver involvement in the process of actually going that fast, it all seems a bit… unnecessary. You can, of course, use the paddles to change gear, but it’s easy to get swamped by the ratios on offer and endless paddle clicking. Turbocharging the six in this way predictably means its voice as the revs rise is rather one-dimensional, and as obvious as it may sound, the loud drone from the exhaust isn’t anything like as appealing as that of the old naturally aspirated straight-sixes, although it does sound much better than the now familiar turbocharged ‘four’. 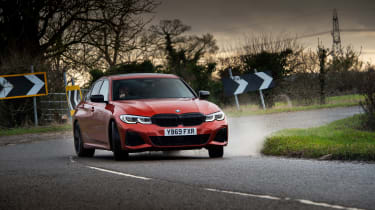 The xDrive set-up, with its electronically controlled multi-plate clutch, works well. It has the ability to make the M340i feel secure one moment, but then with the DSC system relaxed or switched off entirely, it will permit plenty of oversteer, aided by the M Sport rear diff. It needs care though, because the ferocity of the engine’s delivery and the inevitable character of a force-fed throttle response mean you have to be right on your game if it does lose traction at the rear axle, and the way drive to the front tyres snaps the car back in line means that lock must then be removed smartish.

Sadly, the driver never really gets to enjoy some of the latent talents found in the G20 3-series, principally because the steering is perhaps its worst feature, with a strangely disconnected feel, and adding weight in the various sportier driver modes doesn’t change that. Talking of which, there’s Eco Pro, Comfort, Sport, and Sport+, as well as Individual modes, plus Adaptive, which gives plenty of opportunity to adjust the character of the M340i, even if the perfect set-up for UK roads seems rather elusive. 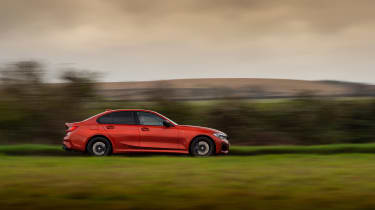 In anything other than Comfort setting the suspension gets notably harsh and fidgety over poor surfaces, while the car fails to morph successfully into a great sports saloon. Even with the dampers in their comfort setting there’s an underlying abruptness to the rebound damping that makes what would otherwise be a devastatingly good mile-cruncher not as relaxing as it could be (our car was on the optional 19-inch wheels with the Adaptive M suspension package). That’s a pity, because while the 340’s very black interior is hardly a riot of colour and design, it certainly feels very solid, and in the front half of the passenger compartment at least, spacious. Still, the less said about the overcomplicated digital instrument binnacle though, the better...

£49,845 is the starting price for an M340i xDrive Saloon, although our test car worked out quite a bit more than that, as is so often the way. Although the BMW is nearly £8000 more than a Jaguar XE P300 R-Dynamic, specify the more expensive HSE trim and throw in a few options and the Jag's value proposition isn't quite so strong. But the Jag is a more involving, more enjoyable car to drive than the BMW, even if its powertrain is nowhere as good in terms of strength or desirability beyond its near 70bhp shortfall. An Alfa Romeo Giulia Veloce can’t compete on power or price either at £40,725, but it’s arguably the pick of the lot in terms of driver appeal. 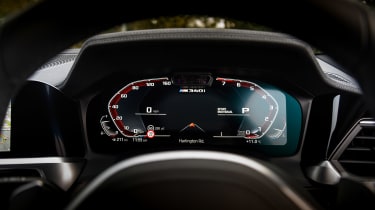 It's more traditional rivals from German brands like Audi and Mercedes-AMG get closer on price, as both the new diesel S4 TDI and existing C43 both hovering at the same circa-£50k entry price give or take at £46,005 and £48,795 respectively. The Audi's change to a new V6 diesel assisted by a mild-hybrid system was a pragmatic move, compromising the S4's driving appeal but becoming a much cheaper everyday car to run thanks to significantly improved fuel consumption and CO2 (therefore tax) figures.

The Mercedes-AMG C43 is a more interesting comparison, as the BMW's traditional advantage in driving dynamics has almost completely disappeared in this generation of compact saloon. The Merc steers better, has a sweeter 386bhp twin-turbocharged V6 petrol engine and more interaction from it's chassis, even if the BMW's outright capability higher.