For decades the 3-series has been the default choice for those searching for an involving drive from their compact exec and with this latest incarnation BMW has managed to retain this position. It’s perhaps not quite as clear cut as it used to be, but despite making strides in comfort and refinement the 3-series is still an engaging car to drive, especially when compared with the majority of the competition.

However, there are many different permutations to consider and which model you choose and how you spec it will have a direct bearing on the way it drives. SE and Sport models have the basic chassis set up which features BMW’s new lift-related damper technology which is aimed at controlling body movement under acceleration and braking. M Sport models feature the same damper technology but with stiffer settings while the Adaptive dampers (that are only available as part of the £2200 M Sport Plus Package) are switchable, offering a supple ride in Comfort mode and a significantly firmer one in Sport. The M Sport Plus package also adds 19-inch wheels and on a 330i or 330d a limited-slip differential, too.

On the standard SE suspension it shouldn’t come as much of a surprise that the ride quality offered is the best of the bunch, especially on 17-inch rims with normal tyres. Even on the Sport model (which uses the same suspension but adds 18-inch wheels with run-flats) it’s a comfortable cruiser. Driven hard and its limitations do eventually come to the fore, there’s a fair amount of bodyroll and ultimately the chassis does lose its composure, coming a little unstuck on dips and crests. 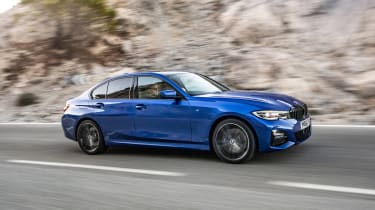 The M Sport feels much tauter than the Sport and exhibits superior body control, cornering with an impressively flat demeanour. Grip is exceptional, both on turn-in and corner exit, but the steering frustrates with its inability to transmit any feel through the thick M Sport steering wheel. It’s precise and well weighted but feels very remote. Ride quality on smooth surfaces is passable but on broken up Tarmac it becomes rather unsettled and a little jiggly, especially at lower speeds.

The best compromise comes at a cost, and that’s with the M Sport Plus package. The adaptive dampers are slightly softer than the SE/Sport set up in Comfort mode and a modicum firmer than the M Sport in Sport mode. The ride is good, if not quite as exceptional as in a SE model thanks to the addition of 19-inch wheels but a car with the M Sport Plus package does offer the best compromise between a supple ride and handling prowess. This is particularly true in the rear-wheel drive 330i and 330d as the addition of a limited-slip differential aids traction and driver involvement.

Ultimately though the 3-series is slightly less playful than before with less feedback through the chassis, seats and steering. The xDrive models are incredibly surefooted but even less inclined to indulge in even a whiff of oversteer unless you’re decidedly committed.