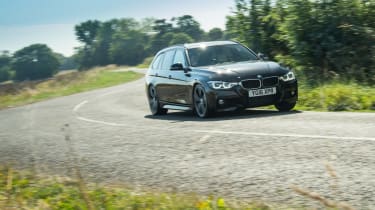 The BMW 3-series – which recently celebrated its 40th anniversary and is now into its sixth incarnation – has a reputation for being more than just a dull executive saloon. It’s always been that bit more agile and engaging than the Mercedes or Audi alternative, while the ultimate performance version, the M3, has helped cement the saloon’s sporting status.

> Read our review of the BMW M3

Some of the lithe and athletic characteristics that older 3-series exhibited, though, have been lost in the latest iteration and have been replaced with higher levels of luxury. Still, BMW’s small saloon is capable of to serve up a satisfying, fun, if not the most thrilling of drives. Equipped with the 3-litre turbocharged straight-six, the 340i has some respectable performance, too and can accelerate from 0-62mph in 5.2sec. The 335d xDrive is quicker still, achieving the standard dash in 4.8sec. Admittedly, the basic 316d isn’t as impressive and takes over twice as long reaching 62mph in 10.7sec.

The 3-series range no longer includes a two-door coupe, that has become the 4-series, but now, as well as the Touring (an estate to you and me) there’s the GT; a tall-ish, but not an SUV, five-door with a coupe-like silhouette. It’s the answer to a question no one ever asked.

As well as a range of bodystyle and engines, much of the 3-series range is available with four-wheel drive. BMW’s xDrive system does add a degree of extra security, but it also detracts from the car’s otherwise approachable and predictable limits.

> Performance and 0-60mph time - Some very quick cars even sub-M3, and performance is broadly strong across the range.

> Engine and gearbox – Petrol engines of three, four and six cylinders and four- and six-pot diesels, manual and automatic, and rear- or all-wheel drive. A vast range available.

> Ride and handling - Not quite the finely-honed tool it once was, but the tradeoff is a better ride than any 3-series has had for years.

> MPG and running costs - Over 148.7mpg is possible (in theory) with the 330e hybrid, but other models are still respectably frugal.

> Interior and tech - Driving position is spot-on and while the 3's cabin isn't a design classic, it's well made and logically arranged.

> Design – Its low and aggressive nose looks particularly good in M Sport trim, even more so with LED headlamps. The Touring has fantastic proportions, too. 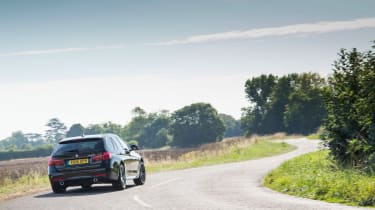 The very least you can spend on a shiny new 3-series is £25,580. This gets you a relatively depressing 318i three-cylinder petrol in SE trim, though the reality of the 3-series range is that even the cheapest cars although slow are fairly sweet to drive. Insurance is sensible too, in group 23.

Sport trim lifts that by only £300, while Touring estates will set you back an additional £1430 over the equivalent saloon and an automatic gearbox will cost between £1420 and £1690 depending on which engine.

Rivals aren't hard to come by in this class. BMW's closest rivals, the Audi A4 and Mercedes-Benz C-class, are both staggeringly capable in their latest form, with each trading some of the BMW's dynamic abilities for extra comfort and in both cases, even better cabin quality and materials.

Jaguar's XE gets close to challenging the 3-series in terms of fun, though drive the two back-to-back and it's clear that the BMW is a product of over 40 years of continual improvement while the Jag is a relatively fresh attempt in this sector (let's not mention the X-type...). The BMW just feels that little more polished in almost every area and Jaguar's volume 2-litre diesel, contrary to what you may have read elsewhere, is far from being a model of refinement.

The XE might not steal the BMW’s title as the best steer in this class but Alfa Romeo’s new Giulia does. It’s not just the 503bhp Quadrifoglio version of the Italian saloon that we’ve been impressed with either, the 2-litre petrol is also extremely capable and fun. With super fast steering, 50:50 weight distribution, a carbonfibre propshaft and the option of a LSD, the Alfa is much more focused than the 3-series. The BMW still offers a better compromise between comfort, efficiency and usability, but the Alfa steals the show when it comes to pure thrills.