The 3-series powertrain comes in a multitude of different flavours. Entry level 318i petrols aren't, as you might expect, 1.8-litre fours, but 1.5-litre turbocharged three-cylinder models. The unit is much the same as you'll find in a Mini Cooper or indeed BMW's own i8.

> Read our review of the BMW i8

It develops respectable levels of power and torque in 3-series when fitted to the 3-series, with 134bhp (from a relatively low 4400rpm) and 162lb ft (at 1250rpm) at your disposal. There's a pleasant note to the three-pot, not dissimilar to BMW's own sixes, and the lighter weight up front is noticeable.

The top diesel, badged 335d, is also a 3-litre inline six and is also turbocharged. It develops less power (309bhp) but a great deal more torque (465lb ft at 1500rpm) than its petrol-powered cousin. Combined with standard xDrive all-wheel drive (the 340i is rear-drive only), it explains the 335d's serious performance figures. It too is relatively sonorous (by diesel standards) and punches hard at virtually any engine speed. 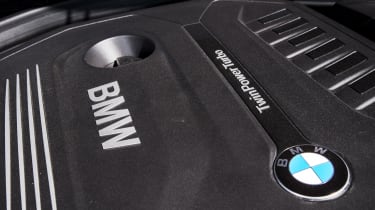 Six-speed manual transmissions are available across most of the range and eight-speed automatics are optional. By the time you reach the top of the range though, both the 335d and 340i are automatic-only, and the former is xDrive-only. xDrive is also available on both the 320i and 320d, and the 330d, while the rest of the range is rear-drive.

An alternative method of going quickly is the plug-in hybrid 330e model, which is only available as a saloon. It teams BMW's 2-litre, four-cylinder petrol running gear to an eight-speed automatic in which the fluid flywheel has been replaced by an 87bhp electric motor. System maximums are 241bhp and 310lb ft.