If you’re after eye-widening punch, it has to be one of the 335d or 340i-badged cars. Either offers up monster acceleration at any revs, with the petrol eclipsing the diesel as the more powerful unit but the diesel fighting back with a considerably higher torque figure.

The diesel is quicker off the mark too, largely down to the 335d only coming as an xDrive in the UK (the 340i is exclusively RWD). It affords the diesel mammoth off-the-line traction and helps the saloon version hit 62mph from a standstill in 4.8sec.

The 340i is 0.4sec slower to 62mph at 5.2sec. However, Despite being slower, the petrol model is the better car to drive and its engine is much more enjoyable. Top speed on both cars is an electronically limited 155mph. 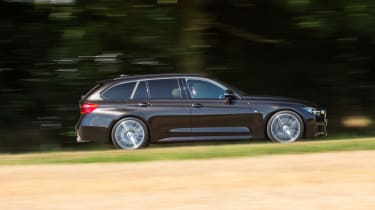 Aside from the M3, those two are the quickest 3-series you'll come across. They're definitely a different experience to BMW's proper M car, but the straight-line performance of either is hard to argue with.

The final model is the plug-in hybrid 330e. The combined efforts of petrol and electric power give it a 0-62mph time of 6.1sec, which is almost brisk enough to match the powerful 330 petrol and diesels. Top speed is a little lower than those though, at 140mph. Probably enough in the UK, realistically...