The BMW’s cabin took a giant stride in quality and aesthetics compared to the old 3-series – and that was hardly shabby inside. It looks bright and modern and there’s a sense of quality in the construction and materials.

Infotainment is dealt with through BMW’s iDrive, it’s blessed with beautiful, crisp graphics and is one of the most intuitive systems on the market. BMW perseverance in the face of hostility directed at early iDrive systems has paid-off and it has been developed to perfection. 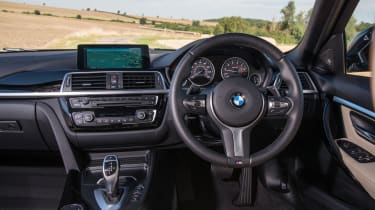 The driving position in the 3-series is spot on as not only is the seat adjustable in many ways there’s also a great range of movement in the steering column, too.

There’s plenty of space, especially in the Touring and GT models, with the Touring boasting some useful ways of accessing its 440- to 1500-litre boot, such as a 40:20:40 split rear bench, automatic tailgate opening and the ability to open the rear glass independently of the rest of the boot hatch.

In terms of technology, there is little that you can’t specify on the 3-series, as such luxuries as Active Cruise Control with Stop & Go, heated rear seats, a heads-up display, a whole wealth of safety-related driver assist functions and Adaptive M Sport suspension are among the many, many things listed in the lengthy options chart.