The BMW kidney grilles on the new 3-series are mounted low and give the 3-series an aggressive look. It’s easily as handsome and appealing as its supposedly more rakish 4-series siblings. A mild facelift in 2015 freshened up the shape, which had been on sale since 2012, with more defined LED headlamps.

As much as we like the look of the saloon, it’s the Touring that we think is the most handsome of the range. Even though its actually heavier, the proportions of the estate model make it look lighter and almost ready to pounce.

Our least favourite, both in terms of looks and the way it drives, is the hunch-backed GT. 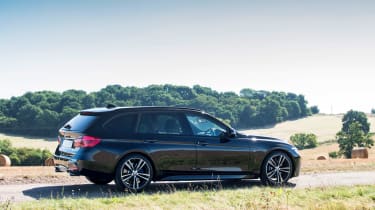