If there was one area where the previous F30 generation of 3-series was beginning to lag behind its rivals it was in its interior design and the technology that was offered. There was nothing wrong with it when it made its debut in 2012 but despite tweaks over its life it was beginning to look rather old hat when compared to the latest offerings from Audi and Mercedes.

All that’s changed with the latest G20 model, mainly thanks to being based on the CLAR architecture that underpins both the 5- and 7-series. As a result the 3-series now has a tech heavy interior with enough gadgets and options to keep the most tech-savvy buyers happy.

It’s roomier inside too, with BMW claiming an additional 11mm of rear leg room along with improved headroom for all passengers. All models bar the SE receive leather upholstery and Sport and M Sport models both feature sports seats with a greater level of adjustment. The quality of materials is first rate and fit and finish is excellent, too. 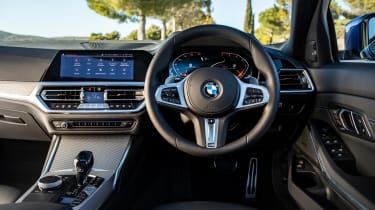 BMW is making much of its new ‘Intelligent Personal Assistant’ which is standard in all models and allows you to interact with the car in a similar way to Alexa or Siri by uttering the phrase ‘Hey BMW’. It is designed to learn your voice and habits with the idea that the more you use it the more intuitive the system will become. For those that like voice control it’ll no doubt be a boon, but for Luddites it’ll probably go unused for long periods of time. Apple Car Play is standard across the range but you’re out of luck if you’re an Android Auto user as it’s not available.

SE and Sport models have an 8.8-inch central display screen and traditional instrumentation while M Sport models (which BMW reckons will account for 70 per cent of sales) receive a larger 10.25 central monitor and BMW’s new Live Cockpit Professional with fully digital instrumentation. This leads to a somewhat contrived set of instruments with a rev counter that runs counter clockwise and is rather hard to read. The plus side is that there’s a whole host of additional information within the dash pod, including sat nav maps and directions.

The central monitor is fully customisable with the information each individual driver requires and has full touchscreen capability – fortunately it can still be operated via the iDrive controller which is still excellent. However, the shortcut buttons around the controller, along with the Sport/Comfort/Eco Pro buttons are less intuitive to use than before as they now have a flatter surface and you might not necessarily find the right one by touch alone. Similarly, the headlight switch which used to be a rotary controller has been replaced by buttons which means you have to look at them in order to hit the right one. Previously the rotary controller could be located and operated without taking one’s eyes off the road.

Overall though the 3-series’ cabin is a very pleasant place to be and bar some minor irritations it’s ergonomically excellent. There’s a host of standard equipment too with plenty of ‘Connected’ services if that’s your bag. As ever there’s also an extensive options list, although these have been streamlined into several different packages rather than being individual items. If you wanted the head-up display (it’s excellent, large and clear to read) you also have to have Harman Kardon speakers, gesture control, enhanced Bluetooth and WiFi preparation as it’s all part of the Technology Package – a £1900 upgrade on an M Sport model.