It might have been the very first M3, but the E30 is still considered one of BMW M's finest creations to this day 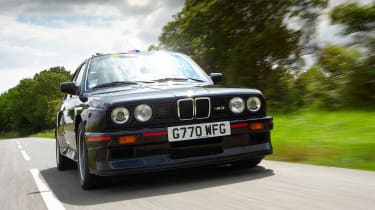 Formula One hero Jean Alesi had an E30 M3 and said it was one of the most enjoyable and best-handling road cars he’d ever owned. The elemental M ‘coupe’ probably didn’t need his endorsement – it had already established itself as the most successful model ever to compete in the European and World Touring Car championships – but Alesi’s blessing added to the lightweight, 2.3-litre, four-cylinder marvel’s celebrity status and long-term investment value. Today, evo is far from alone in believing that the original M3 is the finest car BMW M GmbH has ever produced and the stuff from which icons are made.

And it seems equally certain that the actual stuff from which it was made – specifically the rear-end bodywork that differentiated it from lesser 3-series models – formed part of that appeal. It gave the M3 the appearance of a unique model with one very clear aim in mind: winning races on the track. For that to happen, governing body FISA’s Group A regulations stipulated that 5000 road cars had to be produced, a figure that far exceeded the Motorsport department’s capacity, so M3 production began at BMW’s Munich factory in September 1986.

Although it had the same basic unitary body shell as the rest of the E30 3-series range, the M3 acquired 12 unique body panels designed to reduce drag and, with the help of a higher rear deck and sizeable boot spoiler, balance the aerodynamics front-to-rear. Similarly, the flared wheelarches had to accommodate the wider track and more aggressive castor angle of the larger, fatter wheels (rear rims up to 10in wide would be used in competition). So they had blistered profiles, like those of the Audi Quattro and Lancia Delta Integrale, to cut down turbulence. 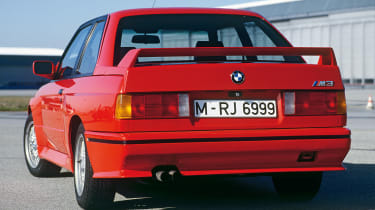 The M3 also had a more steeply raked rear window to help it slip more easily through the air and, like the windscreen, it was bonded to its frame to increase rigidity. Attention to aerodynamic detail even focused on the C-pillars, which were reprofiled to promote the smooth flow of air along the edge of the roof and angle it towards the rear wing. In fact, the only exterior body panels shared with regular 3-series models were the bonnet and roof. While the new arches were steel, other components, including the bootlid, bumpers, front air dam and flared sills, were fabricated from Sheet Moulding Composite (SMC).

As the E30 M3 evolved, so its plastic mouldings got a little lighter, but the formula for arguably the best thought-out body kit ever made didn’t change.