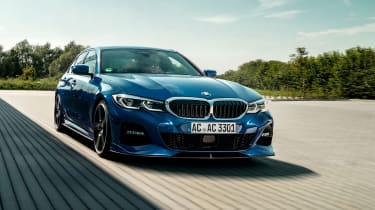 BMW’s seventh generation of 3-series, the G20, might have only been on sale for six months but the burgeoning aftermarket has already come up with tuning and personalisation options for those looking to make their 3-series stand out in the company car park. As Germany’s leading BMW fettler it should come as little surprise that AC Schnitzer is one of the first on the market with an (almost) complete set of updates and modifications for the car.

If you’re after more power for your 3-series you’ll have to wait a little longer for Schnitzer to finish its development work – ensuring 100 per cent reliability and gaining TüV approval takes time. Upgrades in the pipeline include the 320i, 330i, M340i and 330d. Judging by its work on previous BMW model series expect gains of around 35bhp and 45lb ft for the 20i, 55bhp and 65lb ft for the 40i, and 45bhp and 60lb ft for the 30d once the upgrades are announced. With today’s turbocharged engines often sounding a little anaemic AC Schnitzer has various different exhaust systems on offer to enhance the soundtrack and with a variety of tailpipe finishes – carbonfibre, chrome or black.

Suspension is often an area in which Schnitzer excels and it has two different set-ups to offer G20 owners. The first is a simple spring kit that lowers the car by approximately 25mm while still offering a compliant ride. For those after a more involving drive the Sports Suspension would be the one to go for. Again it lowers the ride height by around 25mm and is claimed to offer improved response yet without compromising the ride quality. 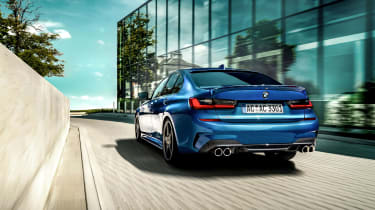 For many it’ll be the exterior embellishments that they’re most interested in and AC Schnitzer has a set of upgrades for the car that include front spoiler elements in conjunction with a front splitter as well as side skirts and a spoiler that sits at the top of the rear screen and another to enhance the boot lid. To complete the exterior package Schnitzer can offer its AC1 light alloy wheels in Bicolour or Anthracite finishes and in either 19- or 20-inch diameters.

It’s pretty hard to fault the interior of the 3-series so Schnitzer has kept upgrades to a minimum here, but should you so wish there are new aluminium shift paddles, an aluminium pedal set and a key holder too. 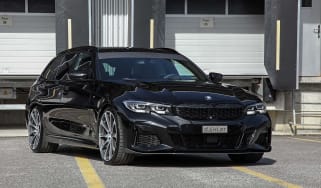 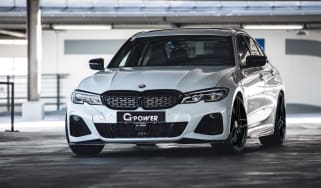