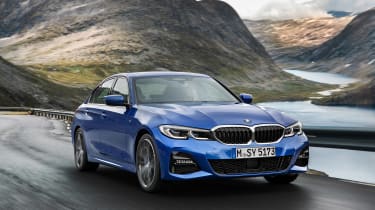 For generations, the BMW 3-series was the go-to car if you wanted a small saloon that was prepared to sacrifice some practicality for a bit more enjoyment. But in recent times that hasn’t been the case. A more generic approach to the 3-series’ visual and dynamic make-up, combined with an upping of their game from Audi and Mercedes in terms of the A4 and C Class respectively, has given BMW more than a few sleepless nights in recent years.

This seventh generation 3-series is big news for BMW, and not just because it has to claw back lost ground to its aforementioned rivals. It will also form the basis of the company’s next electric car, the i4 (the replacement for the 4-series Gran Coupe) due in 2021 and, of course, an evo favourite the next M3 in 2020.

> Click here for our review of the Audi A4 Avant

A new 3-series Touring will follow early in 2019, with the 4-series coupe, cabriolet and M4 all arriving over the next twelve months.

BMW has achieved a number of goals with the new 3 Series in terms of its chassis, chiefly a 50/50 weight distribution, a lower centre of gravity, wider front and rear tracks and an increase in body and suspension mounting stiffness of at least 25 per cent. The optional M Sport and Adaptive M suspension have a 20 per cent stiffer spring as a consequence and lower the ride height by 10mm.

Another addition to the chassis is a new lift-related damper technology. Designed to control the body’s movement under acceleration and braking, it features additional hydraulic damping on the front axle and a compression reduction system on the rear. The principle is that it reduces both excessive dive at the front, and reduces unsettled damper response at the rear. 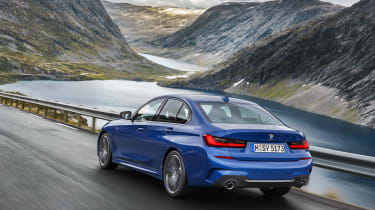 On the front axle there is an inner sleeve within the damper that takes care of the majority of chassis movements, the whole damper only coming into play when the forces and loads increase. The rear dampers remain ‘continuously adaptive’ no matter the load, with the whole concept designed to maximise ‘sportiness’ without effecting comfort.

M Performance brakes and an electronically controlled rear differential are also available as options, the latter only in combination with the optional M Sport or Adaptive M suspension.

Away from the tech bits that have an impact on how the car drives, this is also the most technologically advanced 3-series BMW has ever built. Based around a new in-car assistance called ‘Hey BMW’ (yes, Mercedes-Benz has called its ‘Hey Mercedes’…”) it’s linked to the car’s infotainment, climate control, sat-nav and pretty much everything else you would use once and never again once the novelty had worn off.

If you are a fan of such technology, it’s a system that’s been well integrated and thought out responding to commands without finding yourself shouting at the steering wheel in despair because you can’t change the radio station. 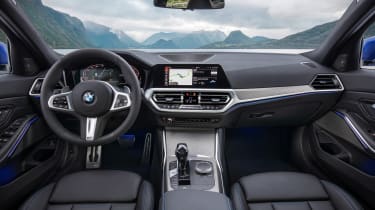 At launch there will be two petrol and three diesel engines offered ranging from a 184bhp 2-litre turbocharged petrol for the 320i and a range topping 254bhp TwinPower 2-litre in the 330i driven here; both are four-cylinder engines. The 3-litre straight-six turbo in the 340i won’t arrive until summer 2019.

Only available with rear-wheel drive (if you want BMW’s xDrive four-wheel system you’ll need to order a 320d or 340i), the 330i is available with either an eight-speed Steptronic or Steptronic Sport auto gearbox. We’re afraid there are no plans for a manual 330i.

Traffic light racers will be pleased to hear it’ll reach 62mph in 5.8secs after the lights go green and crack 155mph. 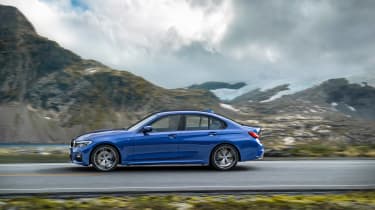 It does many things you’d expect of a 3-series. Its chassis exudes a level of balance and confidence its rivals still struggle to match and the electronic steering is consistent in its weighting and precision if lacking in feel or feedback you can confidently work with.

Then you get to the ride, which - unfortunately in the 330i M Sport we drove on 19-inch wheels - suffered from harshness at low speed, and when you begin to enjoy the road becomes unsettled. As your speed increases, so do vertical inputs, to the point where you find yourself backing off and rather than pushing harder. A drive in a car fitted with the optional adaptive dampers is quickly needed.

Its uninspiring engine also doesn’t help the new 330i’s cause. The four-cylinder TwinPower motor is devoid of any character or inspiration, although it is happy to rev and encourages you to do so. It does allow you to manage both power and torque delivery with an unexpected precision, but it’s not a classic BMW engine and only goes to highlight how much we miss the company’s six-cylinder motors. And yes, despite the eight-speed auto’s smoothness, a six-speed manual would bring more life and soul to the car. 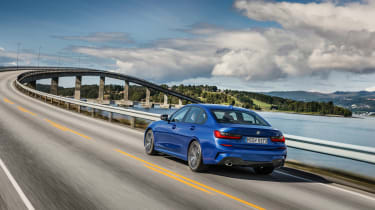 The biggest frustration is that a few laps of the Portimao circuit in a prototype 340i Xdrive showed there is a great deal of talent and ability engineered in to the new G20 3-series, but on the evidence presented here, very little of it has been allowed to filter down to the lesser models.