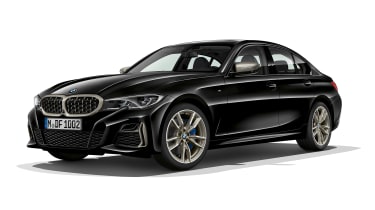 BMW has announced the first sporty version of its brand new 3-series, the M340i xDrive. It might not be the full-blown M3, but this model follows a line of successful M Performance models, including the M140i hot hatch and the M240i coupe. When the new M340i goes on sale in July next year, it will go head-to-head with the Audi S4 and Mercedes-AMG C43. Although there’s currently no word on prices, expect to pay somewhere just north of £45,000.

The new generation M340i is the first M Performance 3 series BMW has made – the German-only M318is of the 1990s was nothing more than a body kit and a wing to homologate extra aero parts for racing – but it doesn’t follow the same template set by many of the other M Performance models that have been sold in the UK. Firstly, as you might have guessed from the xDrive badge, the new M340i is four-wheel drive. Torque is split at the back of the eight-speed automatic and two propshafts then take drive to the front and rear axle.

As well as an all-wheel drive system, another departure for an M Performance model is a standard fit a limited-slip differential, something that’s usually the preserve of full fat M cars. But rather than just being a standard mechanical unit, the LSD in the back of the new model is the same electronically controlled M-sport diff’ that you’ll find in all the proper M cars.

The M340i isn’t a total departure from the marque’s existing M Performance cars, though. Its 3-litre straight-six engine, fitted with a single twin-scroll turbocharger, is the same as the B58 motor found in the M140i, M240i and X3 M40i. Rather than having ‘just’ 355bhp (previously, the most amount of power the B58 straight-six has produced from the factory), the engine in the new sporty 3-series has 369bhp. However, torque remains the same at 369lb ft. The engine promises to sound more exciting than ever thanks to the M340i having an M Sport exhaust fitted with a electronically actived valve to control noise.

The result of the extra power, as well as the added traction from the four-wheel drive system and LSD, means the M340i can accelerate from 0 to 62mph in 4.4sec. That’s 0.8sec quicker than fastest previous generation 3-series, the 340i, and only 0.1sec behind the 425bhp M3. That acceleration figure puts it ahead of both the AMG C43 and Audi S4, as both cars complete the dash to 62mph in 4.7sec.

The 3-series basic chassis architecture has not been changed for the M340i, there’s still the MacPherson strut with additional wishbone front suspension and multi-link rear. However, M-specific suspension lowers the car by 10mm, there’s improved camber angles and a slightly wider track – although not enough to facilitate any wider bodywork. The front brakes are a pair of four-piston fixed caliper units gripping 348mm disks, while at the back is two single-piston calipers around 345mm rotors. 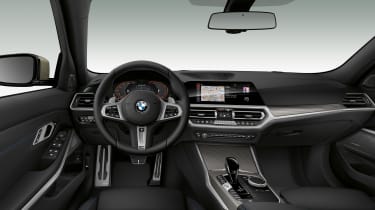 There are a few visual clues that denote this is no ordinary 3-series. Like other M Performance cars, it has grey mirror cap, although the new shade on the M340i is a little more bronze-coloured than the hue used on the M140i, M240i and X3 M40i. The bumper inserts, tailpipes and model badge are all in the same colour, too. So is the front grille, however the most notable element of the M340i’s nostrils is that the vertical slats of the standard car have been replaced with a mesh.