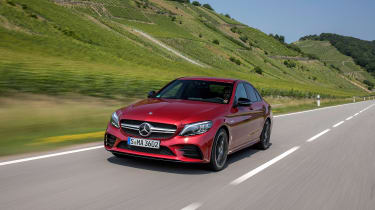 The Mercedes-AMG C43 is something of a hidden gem in the C-Class line-up. Often overshadowed by the bombastic C63, the C43 takes a stealthy approach to speed. Aimed at models like the Audi S5 and BMW 340i, the Mercedes is one of our favourite sports saloons (and estates; there’s a wagon if you need more space).

In line with the rest of the C-Class line-up, the C43 has been treated to a little mid-life refresh that includes, crucially, a touch more power. In fairness this actually is more of a trim update than an actual facelift, with the exterior changes running to little more than some revised headlamps and tail lights, plus subtle tweaks to the front and rear bumpers. There are greater changes inside, where there’s now the option of an S-Class-inspired 12.3-inch instrument cluster for the dials, a larger 10.25-inch infotainment screen and a new three-spoke wheel that incorporates Mercedes S-Class-style touchpads. There also so minor changes to the trim options, but nothing to really write home about. Still, it’s arguable whether the handsome and well-finished C43 really needed anything in the way of visual changes, and it appears Merc’s designers agreed.

On the plus side, the extra power and torque have improved the C43’s already excellent driving dynamics, allowing you to exploit the natural poise and agility if the four-wheel drive chassis – this car really is a hoot to drive. Yet it’s also refined and comfortable when you want to take it easy, making a car that slides effortlessly into your daily routine. 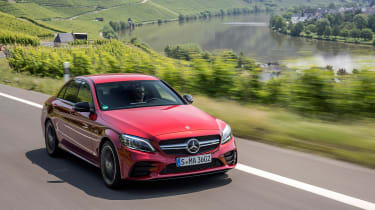 Mechanically the C43 is much the same as before, which means you get a turbocharged 3.0-litre V6 that drives all four-wheels through a nine-speed automatic transmission. However, that engine has been massaged to deliver an extra 23bhp (now 385bhp) and 32lb ft (now 384lb ft). As before, it’s available with a Sports exhaust (£1000) that adds greater volume and a snarling soundtrack at the touch of a button.

Elsewhere, the neat 4MATIC transmission remains. It’s a rear-biased system, with about 70 percent of the torque going to the back axle – although it can shuffle this back or forward depending on the conditions. It aims to give the car the feel of a rear-driver, but with security of all wheel drive. As before, adaptive dampers work in conjunction with lowered and stiffened sports suspension.

Many of the Mercedes’ updates have been aimed at the technology, with the headlamps featuring the firm’s MULTIBEAM and ULTRA RANGE upgrades. The former utilizes 84 separate LEDs to deliver a fast acting adaptive beam pattern, while the latter delivers an impressive 650-metre range when full beam is engaged. Also improved are the car’s semi-autonomous driving functions, with the Drive Assist adaptive cruise control now working in conjunction with the GPS to adjust your speed based on potential hazards, such as corners, junctions and roundabouts. 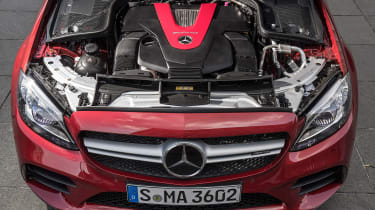 The Mercedes’ familiar twin-turbocharged 3.0-litre V6 has been for a mild workout in the gym, resulting in a power boost to 385bhp and a swelling of torque to 384lb ft – by comparison the Audi S4 musters 349bhp and 369lb ft.

Curiously Mercedes claims an identical 4.7 seconds (4.8 seconds for the estate) for the 0-62mph sprint - although in reality the car feels far faster than this figure suggests. In it’s Comfort settings the throttle is responsive enough, but for most situations the sharper Sport setting is a better bet, allowing the engine to respond more keenly to your throttle inputs.

As you’d expect with 385bhp, the C43 feels quick – although not much faster than before. It’s not as ferociously fast as the V8-engined C63, but it gathers pace with real conviction and makes mincemeat of slow moving traffic. And if you find the C63’s bombastic soundtrack just a little too much, the C43’s more cultured and howl could be just the thing. Add the optional Sports exhaust and you get a bit more volume and satisfying crackle on the overrun, but it’s still muted enough not to attract unwanted attention. 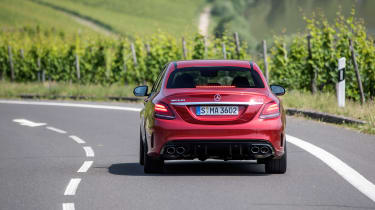 Perhaps the biggest fly in the ointment is the nine-speed DCT Speedshift gearbox, which suffers from the same frustrating niggles as it did in the old car. It’s smooth a quick enough when left to its own devices, and is fairly perceptive in its shifts when you engage Sport or Sport+, but downchanges can be delivered with a real judder and lurch, particularly when you use the manual paddles. Speaking of which, you have to keep an eye on the rev counter when accelerating hard (the TFT display flashing a red warning as you close in on the limiter), because if you ask for an upshift just as the rev cutout is triggered the ECU will have a bit of fit and initially refuse the next ratio, causing the car baulk horribly.

Much as before, if we’re honest, which is really no bad thing. It’s not the last word in driver involvement, but as a fast, composed and subtle daily driver the C43 is almost without equal. Yet it’s the impressive duality of the Mercedes that really stands out; its ability to pick apart sinuous back roads and an alarming rate, yet glide quietly and comfortable when you simply want to cruise.

Part of the car’s appeal can be traced to its suspension, which in Comfort mode soaks up the bumps with just a hint of relaxing float. Ramp up through the Sport and Sport+ settings though, and you can sense the dampers tensing up to deliver impressive body control. There’s bags of grip too, the C43 clinging on gamely and even in tighter corners resisting the urge to push it’s nose wide. It’s helped here by the four-wheel drive system, which splits the torque 31 percent to the front and 69 percent to the rear, helping give the Mercedes the feel and balance of a rear-wheel drive machine, but with the traction and security of all-wheel drive. You can coax the C43 into a subtle slips of oversteer out of slower bends, in the dry at least, but the transmission quickly does it’s thing and has you firing effortlessly down the next straight. And while the steering doesn’t deliver the last word in feedback, it’s direct and well-weighted, particularly in its Comfort mode (as you’d expect, you can mix and match your favourite damping, throttle and steering settings using the Individual function).

By being fast and agile when the mood takes, yet comfortable and refined when it doesn’t, the Mercedes-AMG C43 is arguably the pick of the C-Class line-up, C63 included. The Coupe, Cabriolet and saloon are all desirable, but it’s an versatile estate that swift and stealthy C43 makes the most sense.