Think the new 3-series looks a little weedy? You can upgrade it with official M Performance parts 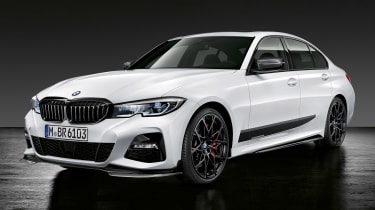 A scant 24 hours after its official unveiling BMW’s new G20 3-series has a set of official M Performance parts to ‘enhance’ its look. Gone are the days when it would take BMW months, if not years, to release M Sport models – these days the sportiest trim package is available at launch – and to ensure the aftermarket doesn’t have everything its own way BMW M now has a set of M Performance accessories to ‘accentuate the dynamic character’ of its latest middleweight exec.

Externally there are a set of aerodynamic components – two choices of front splitter, a rear spoiler, as well as three different options for a rear diffuser. Most of the M Performance parts are available in a choice of finishes, either high-gloss black or hand-made polished carbonfibre, and in the case of the rear diffuser, matt black, too. Additionally, there are a set of carbon mirror caps, some rather unflattering side decals and M Performance tail pipes trims made from a mix of titanium and carbonfibre.

Aftermarket wheels are a nice little earner and for the G20 3-series BMW will initially offer four choices – a set of 18-inch matt black double spoke items or two different sets of forged 20-inch alloys in either a cross-spoke or Y-spoke design, the latter being available with two different finishes. BMW will even sell you a set of wheel bags to keep your rims shiny while in storage. Poking out from behind the upgraded wheels are a set of M Performance front brakes featuring bright red four-pot calipers with lighter, larger, perforated and grooved discs that BMW says offer ‘considerably enhanced deceleration’. 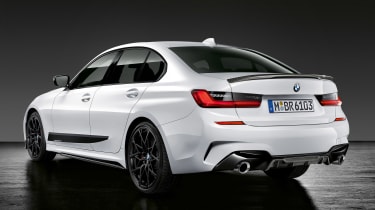 As you’d expect there are some trinkets to adorn the cockpit, too. There’s an M Performance steering wheel clad in a mix of Alcantara and leather with a flash of red as its 12 o’clock tell-tale and if you so desire you can add a smattering of carbonfibre trim to the wheel along with carbon shift paddles for Steptronic-equipped machines. The carbon theme can be continued with swathes of trim along the dash and on the centre console.

If you want to analyse the data on board your 3-series there’s also an M Performance drive analyser that can be plugged into the car’s OBD port and paired with a smartphone app.

What is currently missing from this array of M Performance accoutrements is anything that enhances the engine’s power output. In previous generations of 3-series BMW has offered ‘Sound and Power’ kits – generally a reworked ECU, an uprated intercooler and a suitably tuneful exhaust – for some mild (but warranty friendly) power gains. No doubt this will be released for the G20 model further down the line along with pricing for the various items that will be available for the car when it goes on sale in March next year.