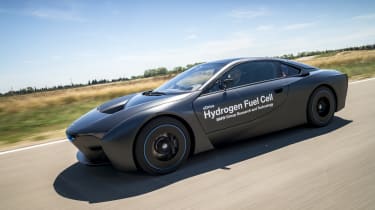 BMW has released details on an i8 research vehicle powered by a hydrogen fuel cell. Said to be acting as a test bed for new technology, the fuel cell car is a precursor to mass production hydrogen powered vehicles, which BMW says could arrive by 2020.

The research vehicle is based around the i8 but features significant styling alterations that give it a more sleek and simple, yet futuristic look. The headlights and kidney grille have been redesigned with a larger set of air intakes to feed radiators situated below.

The i8's carbonfibre construction remains, but the petrol-electric hybrid system in the current generation road car has been reapleced by a hydrogen fuel cell. The car's fuel stack now sits where the 1.5-litre 3-cylinder petrol engine usually resides.

Hydrogen is stored in a tank mounted down the centre of the car, with electrical energy transferred to an electric motor at the rear. BMW says the car puts out 242bhp and manages a 0-62mph time of less than 6 seconds, with a top speed of 124mph. 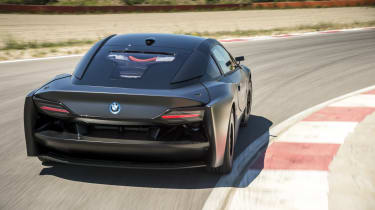 The i8 prototype has actually been in testing since 2012 and has recently been retired from service. Following the announcement of an agreement with Toyota, BMW will now work with the Japanese firm to bring hydrogen fuel cells to production cars. Toyota's first series production fuel cell car, the Mirai, is already on sale in some markets.

Demonstrated at the brand's Group Innovation Day, the hydrogen-powered 5GT is capable of refuelling in less than five minutes and has a range of nearly 434 miles. The car puts out zero emissions, with nothing other than water being produced by the powertrain.

Beyond hydrogen, BMW will continue to sell its i3 and i8 model lines, with an i5 and i7 also said to be in the works. Further plug-in hybrid vehicles have been previewed at the Innovation Day with a 2 Series Active Tourer plug-in hybrid.

With electric assistance to the rear wheels, the Active Tourer achieves 62mph in only 6.5 seconds - illustrating the benefits of hybrid technology beyond silent running and lower emissions.